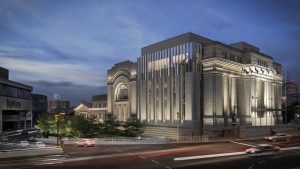 Night view artist’s rendering of temporary home for The Senate of Canada in Ottawa. Image: Diamond and Schmitt/KWC

The historic train station that once welcomed passengers into the heart of Canada’s capital, is being transformed to become the temporary home of the Senate of Canada.

The grand Beaux-Arts structure near the Rideau Canal and Confederation Square was built in 1912 to serve as Ottawa’s central station. However, in the late 1960s it was converted into the Government Conference Centre. Thus, the train station that was once conveniently close to the Parliament Buildings, Chateau Laurier and other landmarks, was moved several kilometres outside the city’score.

Now the National Capital Commission has approved plans to convert the 1912 building again, this time as a temporary home for The Senate of Canada. The Senate’s permanent Chamber in Parliament Hill’s Centre Block is undergoing a decades-long renovation of its own, so the Senate needs new premises.

The changes to the 100-year old former train station are being designed by Diamond Schmitt Architects/KWC Architects in joint venture. They intend to preserve many of the historical architectural details that were lost during the previous alterations of the 1970s, says Martin Davidson, principal with Diamond Schmitt. “The building will once again animate a high-profile intersection in Ottawa along Confederation Boulevard and adjacent to the Rideau Canal, a UNESCO World Heritage site.”

Cross-section of renovations to 1912 former train station for the Senate of Canada. Image: Diamond and Schmitt/KWC Architects.

The renovations will reintroduce the processional route through the building while restoring the finely detailed general waiting room and concourse. The renewed spaces will hold the Senate Chamber, Senate committee rooms and parliamentary offices. Interior design features such as columns, arches, large Diocletian windows and vaulted plaster ceilings will be restored.

An addition on the east will provide a new public face to a façade which was left unfinished following the demolition of the Corry Building decades ago. The addition will be a modern intervention, informed by the geometry, proportions and materials of the existing Beaux Arts façade.

The structural, mechanical and electrical systems will be brought up to current codes. State of the art IT, broadcasting and lighting enhancements will be incorporated; new elevator banks and staircases are being added to connect the north and south blocks and the building is to be made universally accessible. The Library of Parliament will conduct tours of the building, allowing the public in for the first time in decades.

The project has an overall budget of $269 million. The design team includes the following companies:

Acoustics – State of the Art Acoustik

Night view artist’s rendering of temporary home for The Senate of Canada in Ottawa. Image: Diamond and Schmitt/KWC