Jury Comments: “This project’s team found a unique technical solution using bridge slide technology to improve the performance of a 103-year old infrastructure. By using silent piling they also minimized the impact on the surrounding residential area. The project shows a remarkable understanding of the strategic significance of rail and public transit in our communities.” 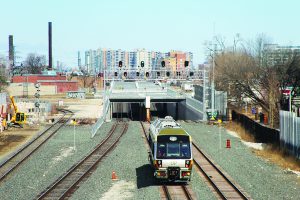 Constructed 130+ years ago, the West Toronto Diamond is one of Canada’s busiest rail intersections. It is where four operating railways intersect in the area called “The Junction.”
The tracks carry primarily Metrolinx and VIA Rail passenger trains, as well as Canadian National and Canadian Pacific (CP) freight trains. Metrolinx, the crown agency that manages transportation in the region, needed to add more passenger trains to accommodate ridership growth. It also was adding Union-Pearson (UP) Express airport train service before the Toronto 2015 Pan Am Games. The bottleneck at the diamonds had to be rectified.
To ease the congestion and accommodate new capacity, a new kilometre-long rail underpass separating the commuter rail tracks from the freight train tracks was built. Parsons provided detailed design for the project and engineering services during construction.
The solution eliminated two at-grade diamond crossings. The new grade-separated structure carries the north-south Metrolinx commuter train corridor below grade through an underpass, while the CP freight tracks cross four new railway bridges at their pre-existing elevation and location. Using accelerated bridge construction (ABC), the four railway bridges were built adjacent to the site and slid laterally into place during four short-duration track closures. The entire project was constructed with minimal interruption of railway operations. Also, the bridges were designed for the later addition of two tracks.

Four bridge slides, 80 metres
In the preliminary design (done by others), the project staging outlined multiple track diversions and conventional bridge construction.
Parsons reworked the project, developing a staging program that eliminated six of the seven original track diversions by using the accelerated bridge construction technique.
The four mainline railway bridge spans, weighing a total of 12,600 tons, were assembled site-adjacent and slid laterally up to 80 metres into their final positions. Each slide was powered by computerized high-speed tandem hydraulic jacks, moving the structures on steel/bronze slide paths.
Due to time constraints, the bridges were slid on their permanent bearings and secured in place after the slides, without the need for subsequent jacking or remedial work to the slide paths. This was one of the first times this specific ABC technology was used on Canadian railway bridges.
In addition, the bridge construction was accelerated by incorporating full-depth precast deck slab elements — transversely connected by post-tensioning — and foundations consisting of a unique interlocking steel pipe pile wall system.

An active and extremely congested site
Besides being carried out amidst four operating railways, the tracks had to be kept active during the vast majority of construction. There were also geographic constraints, including existing roadway underpasses north and south. The area was dense with industrial and residential properties — many extremely close to the project area — and the geometry of the tracks and roadway added complexity. There were buried utilities running through the corridor — a trunk watermain, combined large sanitary/storm sewer, railway signals, and fibre optic main conduit.
Having met these challenges, the 100-year service life of the project provides many benefits for today and tomorrow.