Jury Comments: “This was a very large hydroelectricity generating project that added 500 MW to Ontario’s grid and was successfully completed on budget and ahead of schedule. It involved completely replacing the 1931 Smoky Falls generating station and increasing the capacity of four other linked stations downstream. There was an exceptionally strong involvement of local communities and First Nations. 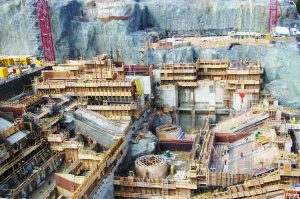 The Lower Mattagami River project is Ontario Power Generation’s largest hydro project in 40 years. It has added almost 500 MW of power by updating three generating stations and completely replacing a fourth.
Hatch acted as the owner’s engineer for the front-end study and design phases, and as the owner’s representative during implementation. The $2.6-billion project was delivered on budget and ahead of schedule. It employed 1,200 people, 70% of whom were drawn from local communities.
Located about 70 kilometres northeast of Kapuskasing in northern Ontario, the Lower Mattagami complex consists of four stations. From south to north they are: Little Long, Smoky Falls, Harmon, and Kipling.
Smoky Falls, built in 1931 with only 52 MW, predated the other stations, was undersized and critically limited the volume of water transmitted through the complex. The other three 1960s dams were designed with some foresight towards future expansion and included two extra intakes each.

An enormous project
To maximize the potential of the resource OPG needed to:
• Build a new station at Smoky Falls (3 units of 90 MW, a 275-ton bridge crane, 130,000 m3 of concrete, 6 intake gates), including a new headrace and tailrace channel. It had to rehabilitate the water-retaining structures and replace one of 10 spillway gates. It also had to construct new 230 kV transmission lines, and decommission the old station.
• Add one-unit extensions of 68 MW, 100 MW, and 84 MW to the Little Long, Harmon, and Kipling generating stations respectively. At each station this work involved 12,000 m3 of concrete, a cellular cofferdam, turbine/generator equipment and high-voltage substations.
From day one until completion of this enormous project, Hatch played a key role. Its engineers developed the Owner’s Requirements document; prepared budget cost estimates; prequalified design-build contractors and turbine/generator suppliers; solicited and evaluated proposals; assisted OPG in the final recommendations for selecting the design-build contractor; provided environmental expertise; and provided Owner’s Representative services during construction.
Technical difficulties and challenges called for innovative solutions. The project had to achieve a balance between maintaining the proper water level (in particular downstream to submerge the turbines) and achieving peak performance so that the four stations will meet their generation requirements for decades. Also the interdependence of the four sites required a specialized work-planning process.
Throughout the project’s construction phase, Hatch made sure to maintain a high level of synergy while continually challenging the contractor and OPG in managing numerous requests for changes.
All the stations and their new units were delivered ahead of schedule in December 2014.

First Nations highly involved
Hatch was responsible for coordinating the project’s Environmental Working Group, which had representatives from OPG, Moose Cree First Nation, and Taykwa Tagamou First Nation. The working group was mandated to advise the Mattagami Extension Coordinating Committee on the 24 terms and conditions of the project’s environmental approval (EA). Hatch also led several environmental due diligence audits of the contractor’s work.
The project has significantly contributed to opening the way for future sustainable development, including new opportunities for many First Nations workers. Specifically, 350 First Nation people benefited directly from career training, with a 96% completion rate. The project also enabled First Nations companies to share approximately $250 million in contracts.