Jury Comments: “This six-year program was to stop erosion of 13 kilometres of shoreline that was causing serious problems folocal residents. The construction of new breakwaters was done with environmental sensitivity and we especially liked how the engineers involved local engineers from the beginning.” 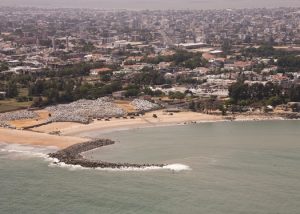 In Cotonou, Benin, approximately 13 metres of shoreline used to disappear under the effects of the sea each year. This situation had serious consequences for the densely populated surrounding area.
Under the auspices of international funding to  adapt to climate change, Norda Stelo and its partners carried out work for nearly U.S. $100 million over a six-year period to stop the advancing sea and rehabilitate the banks.
The project involved conducting engineering studies and building eight groynes along a seven-kilometre stretch of the coastline. The groynes, which are pier-like structures made with concrete blocks and riprap stones, have a total length of 2,445 metres. They interrupt the force of the ocean waves and prevent the sand from being washed away. As part of the project, more than 500,000 metric tonnes of riprap stones were transported from three quarries located 250 kilometres from the construction site.

Transparency and communication
Conducting a major project in a densely populated area was a challeng. Although the project was desired by the population, the work had the potential to disrupt their daily lives and activities. Norda Stelo implemented measures to minimize the disruption and ensure safety throughout the construction period.
The number and diversity of stakeholders also made things complicated. However, transparency and effective communication were key factors in the project’s success.
A relocation plan for affected residents was implemented by the Benin government, with support from Norda Stelo. Several news releases and public meetings helped spread information to the community, while neighbourhood gatherings were held to discuss specific issues. A compensation plan for the impacted population was developed in accordance with Benin’s laws and regulations.
Twenty Beninese workers joined the Norda Stelo team, including eight engineers and several technicians who participated in the topographic and bathymetric surveys (as well as in the monitoring and control activities), gaining coastal engineering experience.
Also, a concrete plant set up to produce the moulded X-blocks created local jobs and gave workers valuable experience.

Results speak for themselves
Studies were conducted and an environmental management plan was implemented to protect the terrestrial and marine habitats. Emphasis was also placed on protecting species that are important to fisheries and tourism, including those with special status, such as sea turtles.
The project was completed on budget and nearly four months ahead of schedule.
The results speak for themselves: the coastal protection works constructed in this project withstood violent storms that hit the entire West African coast in May 2015 and caused damage in several countries.
The project also demonstrated that erosion is spreading rapidly along Benin’s coasts and needs to be addressed through monitoring, appropriate development, and other initiatives.