Jury Comments: “Winner of a special award for environmental stewardship, this commercial refinery for converting non-recyclable garbage into biofuels deals with the challenges of being a “first” technology. The process converts the waste material to biomethanol, and has the potential for very significant environmental benefits, potentially reducing landfilled material by 90%.” 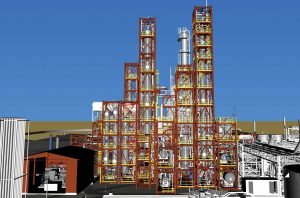 Enerkem Alberta Biofuels is the world’s first commercial biorefinery that converts non-recyclable household garbage into clean, renewable energy. BBA was chosen by Enerkem for its industry expertise to provide detailed engineering for the plant.
Canadians each generate an average of 1,031 kilograms of solid waste per year. From this, an average of 25%, mostly organic waste like food and cardboard, is recycled. The rest of the waste is non-recyclable and mostly dumped in landfills. Some regions incinerate the waste, but when it is deposited in landfills, it decomposes over the years and creates greenhouse gases, such as methane, along with other soil contaminants.
The Enerkem Alberta Biofuels Project is a global game-changing facility because it provides a sustainable alternative by recovering carbon molecules contained in non-recyclable waste and producing biofuels. The plant is fed with materials such as textiles, non-recyclable plastics, wood residues and packaging. Until now this waste could not be recycled in any other way.
Biomethanol, a chemical building block
Located on the site of the Edmonton Waste Management Centre on Aurum Road NE, the Enerkem Alberta Biofuels plant initiated the commercial production of biomethanol in the summer of 2015. The biomethanol product is sold as a chemical building block to produce secondary chemicals, which can then be used for thousands of everyday products.
BBA also participated in the design of a plant expansion to produce cellulosic ethanol, a renewable fuel that is blended with traditional gasoline. Ultimately the plant will have a yearly capacity to process 100,000 dry tones of non-recyclable waste. It will enable the city of Edmonton to increase its rate of waste diversion from landfill to 90%.
The project benefits Canadians in many ways: reducing the production of greenhouse gases; generating biofuels as an alternative to finite fossil fuels; and building a sustainable bio-economy.

Modular units and piping challenges
BBA’s mandate for Enerkem was to provide modular detailed engineering for the methanol purification and ethanol production process units. Enerkem wanted the plant to be designed in modules and to use the least surface area.
Going beyond its engineering mandate, BBA proposed a construction strategy and changes to the project schedule to gain value. Instead of following the standard development sequence, the idea was to design and fabricate modules to align with the construction plan. The goal was also to optimize the time spent on site by large cranes during construction.
The BBA team’s design optimized the weight and volume of the modules to minimize the overall costs. They developed a vertical layout for the modules, minimized their structural steel weight, and efficiently integrated the piping routing into the structures.
The piping between equipment was sized from 1″ to 6″ in diameter. One of the largest conduits operates at extreme temperatures with a flow of wide-ranging components from the garbage. BBA’s mechanical engineering experts designed this customized line and its mechanical supports to prevent the installation of costly expansion joints. The constraints analysis ensured the system would operate reliably under various conditions. The solution is unique in that the conduit is made of various material liners.
The entire design was modelled in 3D so that the plant and its modular approach could be adapted and reproduced by Enerkem for future projects.

Equipment and material research
Since the plant is unique worldwide, the selection of mechanical equipment, piping, valves and instruments was a first and had to be defined. The engineering had to consider fluid velocities, product composition, pressure, temperature, expected plant life, reliability and space limitations. Finding solutions could only be done through the cooperation of BBA design experts, the Enerkem technology team and suppliers.
At the start of this project, Enerkem’s research had been demonstrated through a smaller-scale facility located in Westbury, Québec. The capacity of the Edmonton plant is seven times greater than the demonstration plant and it is supplied with a different feedstock, so BBA worked jointly with the Enerkem technology team to integrate evolutional research into the project.
Thanks to the Enerkem Alberta Biofuels plant, garbage is now seen as an opportunity to create something useful. The project is a significant step toward a sustainable economy where items that are no longer useful are being decomposed to the molecular level and recomposed into a valuable product.