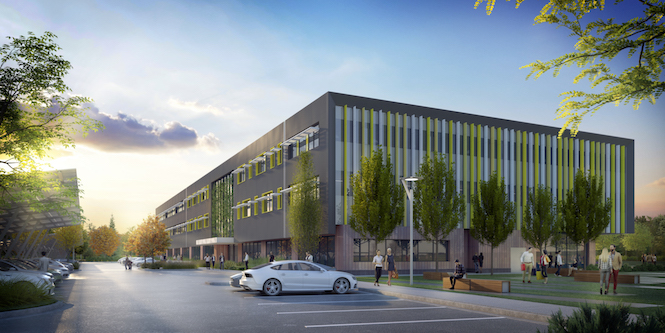 (first published in the May 2018 issue of Canadian Consulting Engineer)

This past April a 100,000 sq. ft. three-storey office building that’s still under construction was awarded a Zero Carbon Building – Design certification from the Canada Green Building Council, the first site anywhere to receive the designation.

The new structure, called evolv1, is being developed by the Cora Group in the Idea Quarter of Waterloo, Ont., where new and established tech companies are sprouting up and creating a true hub for innovation.

The evolv1, modeled to be not only a net-zero but a net-positive building, is demonstrating innovations of its own, proving a commercial developer-led project can achieve the highest in sustainability achievements.

Richard Williams, architect and principal with Stantec, became involved with this project at its feasibility stage in April 2016. The Cora Group, together with Sustainable Waterloo Region (a local not for profit) needed to determine if a multi-tenant, class-A office building built to a net-positive standard would be commercially practical.

“It needed to be economically viable and ultimately replicable so they could justify continuing to build projects of this type in a normal multi-tenant leasing environment,” says Williams.

Stantec worked with a multi-stakeholder group including representatives from The David Johnston Research & Technology Park (University of Waterloo) adjacent to where the building is located, along with the lead tenant, EY.

Using a Stantec-developed parametric modeling program, the firm incorporated multiple inputs including building envelope and system components – both mechanical and electrical – to work through what characteristics the building would need in order to achieve a net positive energy result.

An integrated Stantec team, incorporating architecture and all of the engineering disciplines, a sustainability team, energy modeling and landscape architects were all involved in the project.

“When you’re using parametric modeling, a lot of the aspects really reside within the different engineering expertise, so you need to have that expertise at the table, otherwise it’s just guess work,” says Williams.

Glazing on the north side allows maximum daylight exposure. to, while east and west sides have vertical shading for year-round relief.

Structural steel makes up the core of the building. “From a development standpoint, it is the economical way to go,” says Williams. “Steel allows the building to be erected much more quickly.” The recyclable nature of steel also lends well to the sustainability story of the project.

Optimizing passive systems, which includes the building envelope (cladding and glazing) and exterior sun shading to reduce solar gain while maximizing daylight to reduce the need for lighting, is an energy-saving solution for high-performance sustainable buildings.

The cladding for evolve1 is a high performance aluminum composite panel system. “Within the wall system the keys are having a healthy amount of insulation, and then making the envelope air tight through a really good air barrier system,” notes Williams.

The building envelope was optimized for an R-30 wall and an R-40 roof, which was part of the parametric modeling.

“We’re below 40% glazing, that tends to be around a break point where if you’re over 40% you’re causing your glazing to have performance that becomes uneconomical.”

The glazing is positioned to maximize value to the tenants. “We have vertical sun shades on the east and west sides which help with some of the solar heat gain as the sun is moving around the building,” says Williams.

With respect to the integrated approach, the selection process of the glazing involved extensive discussions between architecture and the mechanical team.

“We were looking at about a dozen types of glazing at one point,” recalls Kaid Al-Ani, P.Eng., principal and mechanical engineer with Stantec.

From a mechanical point of view, they looked at what effect each glazing type would have on the size of HVAC equipment required, while the energy counterparts were modelling the building with the parametric model.

“It was a process of elimination,” says Al-Ani, “With the involvement of the client as well, because there is an aesthetic consideration that had to be factored in.”

The mechanical system is a variable refrigerant flow (VRF) tied to a geothermal system. Al-Ani explains how the efficiency of the VRF system comes from its ability to move energy around, taking heat from one side of the building and moving it to the other when required.

Ventilation is handled with a dedicated outdoor air system, utilizing energy recovery from exhaust air preconditioning the air coming into the building. The installation of CO2 monitoring in the building helps moderate the amount of outdoor air required.

Another passive integration factor is using the south end of the building as a solar wall, where instead of the insulated panels an air space is left behind the first layer of metal cladding allowing heat to build up, preheating incoming ventilation air during cold weather seasons.

“We have a mechanism in our system that’s able—based on outdoor conditions—to automatically determine if the solar wall is required,” says Al-Ani. “When we go into the cooling season we completely bypass the solar wall.”

By using the geothermal solution for heating/cooling, there is no gas consumed for the normal operation of the building. The only source of gas to the building is for an emergency generator to operate the fire pump, a requirement for the sprinkler system.

“We did consider initially using a battery for the generator, but a generator requires a lot of torque at start up, and there just isn’t a battery technology today that would be able to provide that sort of start up power,” says Al-Ani. “Who knows, in the future that technology may be posible.” 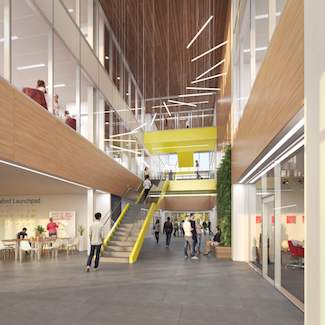 A three-storey green wall in the atrium aids in
the air quality of the collaboration space.

The building has a three-storey green wall within its collaborative atrium space. “We have a dedicated HVAC system that conditions the artrium,” notes Al-Ani, explaining that air gets pulled up the green wall and through to the return air tapping into the humidification qualities and distributing it throughout the artrium. The process lowers the burden on the active humidification systems.

The building’s roof is covered with 700kW photovoltaic panels (PVs) with additional PVs installed as canopies over a portion of the parkade. Annually, the net electricity being generated through the PVs will exceed what the building requires.

Excess energy produced will feed back into the grid. “Basically, because we’re just one small building, the grid becomes our energy partner and storage,” notes Williams. “That’s really how small individual developments like this can participate in terms of energy sharing.

“Ultimately we’re looking to the future where there will be larger micro grids across much broader development areas and other types of energy storage systems that can work across a campus scale or community scale. That’s one of the next frontiers.”

Part of the parametric modeling included profiling what the tenants’ energy usage will be like. The team worked with the developer to understand the typical tenant profile, density of people, electricity requirements and more.

“In the end, if we were able to control the tenancy, like you can in some other types of buildings where the owner is going to occupy the building, we could have probably gotten our energy efficiency even tighter, but here we had to still allow a tolerance for tenants that we don’t know,” says Williams.

A tenant guidelines manual has been produced to show tenants how they can best maintain the building’s level of efficiency without restricting their activities.

One of the cornerstones of the project is to have the ability to be able to replicate this building and show the industry what is possible. The evovl1 project has already garnered attention with its Zero Carbon Initiative certification, and as one of 16 pilot projects in the CaGBC’s Zero Carbon program it’s certain to attract more interest from other developers seeking to gain insights into building energy neutral office spaces.