The first net zero institutional education facility of its kind in Canada opens this fall for students at Mohawk College in Hamilton, Ont. 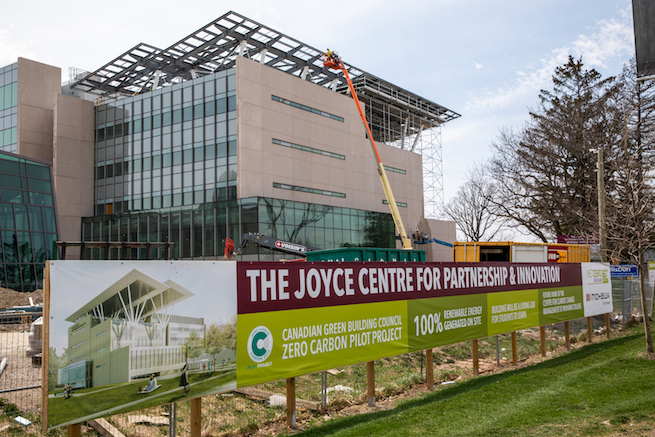 (published in the May 2018 issue of Canadian Consulting Engineer)

In the fall of 2016 Mohawk College in Hamilton, Ont. began breaking ground on the new Joyce Centre for Partnership & Innovation, a 96,000-sq.-ft. five-storey net zero building project that was secured with $20 million from the federal government’s post-secondary institutions Strategic Investment Fund, a fund established to modernize and improve the environmental sustainability of college and university campuses across the country.

“We had a very ambitious project,” explains Tony Cupido, P.Eng., the chief building and facilities officer at the College and the lead representative for the client on this project.

Cupido previously led nearby McMaster University through several LEED projects including the first LEED Gold facility of any university or college in Ontario, back in 2009.

“When you look at the energy intensity of that building at McMaster, it’s five times what this one will be,” remarks Cupido. “Reaching this intensity is a combination of improved design, improved materials and improved performance of materials.”

The net zero Joyce Centre, slated to achieve substantial completion by June, will consume as much energy annually as the photovoltaic (PV) panels located on it and on the rooftops of adjacent sites will generate.

Planning for the net zero project began in early 2016 led by architects from McCallum Sather and B+H Architects. The team of engineers assembled to work on the project included RDH (energy modeling), Mantecon Partners (structural), TMP – The Mitchell Partnership (mechanical), and Mulvey & Banani (electrical, security). “There was a high focus on net zero by the entire team,” says Cupido, “and that really hadn’t been done on a large scale like this before in this area.”

The team produced a Basis of Design document, outlining the overall concept of the building and all of the specific features. “It’s an important document, because it lays out a roadmap for us as an owner,” says Cupido. “It tells us what all of these people are going to do and how they are going to do it. Their approach and methodology is all laid out.”

Early in the process the team established an annual energy use intensity (EUI) target, ultimately ending up at around 73 equivalent kWh/square-metre/year for the building, and RDH then began the energy modeling to determine solutions for heating and cooling the building that would achieve the target.

To keep energy demand low the building envelope needed to be well designed. The facility uses a triple-glazed curtainwall system with an R-value around R-8 and an insulated precast sandwich panel system with an R-value approaching R-30. The ratio of glazing to panels sits around 35% : 65%, providing an overall combined window/wall R-value of at least R-10.

The roofs is designed to an R-40 performance.

The Mohawk campus uses centralized heating for its various buildings, but the new Joyce Centre sits independent. The building will use variable refrigerant flow (VRF) heat pumps coupled to a geoexchange well field. The 28 geothermal wells required drilling down 600 feet through shale, each one taking a day to complete.

The heat pumps, operating in zones, will help with heating or cooling different parts of the building.

A dedicated outdoor air system with heat recovery separates the ventilation from heating and cooling.

There is also a solar thermal hot water system providing domestic hot water and heating for the building. 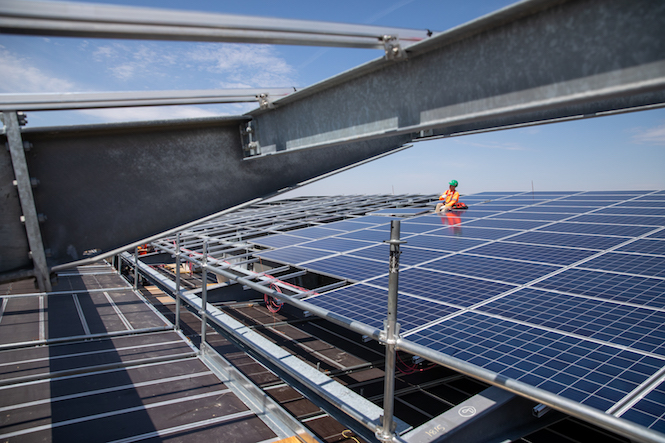 The solar farm feeding the facility is located on wing-shaped structures
above the building and on adjacent building roofs. (photo courtesy Mohawk College)

The solar farm feeding the building will provide 653 kW DC power, translating to 500 kW AC through inverters, says Cupido. That should be enough run the Centre.

“One of the biggest challenges we had was a roof capacity issue,” says Cupido. Fortunately, some of the existing flat roofs on campus adjacent to the new Centre required replacing, so the College installed a lightweight insulated concrete system on the roofs freeing up capacity for the PV systems.

EllisDon was the general contractor on the project, and Walters Group provided design assist on the structural steel elements. Walters became involved from the preliminary stages.

“They had hardly figured out what it would look like and how it would work before we got to work on it,” says Walters’ project manager Kevin McElhone.

“We became involved in the design/assist process to help our customer get what they needed as quickly as possible.”

The HVAC is demand responsive, with CO2 sensors adjusting ventilation when the facility is occupied.

Lighting controls reduce output when daylight is available, and occupancy sensors will turn off lights in vacant rooms. “When you leave a room the lights won’t go off in five minutes, they will go off in five seconds or less,” says Cupido, adding that it has to be that highly reactive to keep the energy use to a minimum. 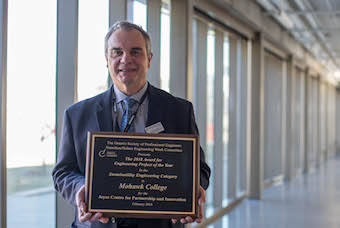 The College is participating in the Canada Green Building Council Zero Carbon Building pilot program, with the Joyce Centre being one of 16 projects across the country. “The program will help us understand what the carbon impact of a new buildings like this is, what issues need to be resolved, what types of standards should be met, and what type of designation should ultimately be achieved.

“And also, from a learning perspective, how does one go about this and what is the protocol to obtain some type of a designation under the Zero Carbon Building initiative.”

Already the project was named the sustainable project of the year by the Ontario Sustainable Energy Assoc.

“We believe this has been a successful project. The proof will come out of the final installation details, training, commissioning all of the components, and then how we manage it as an organization,” says Cupido.