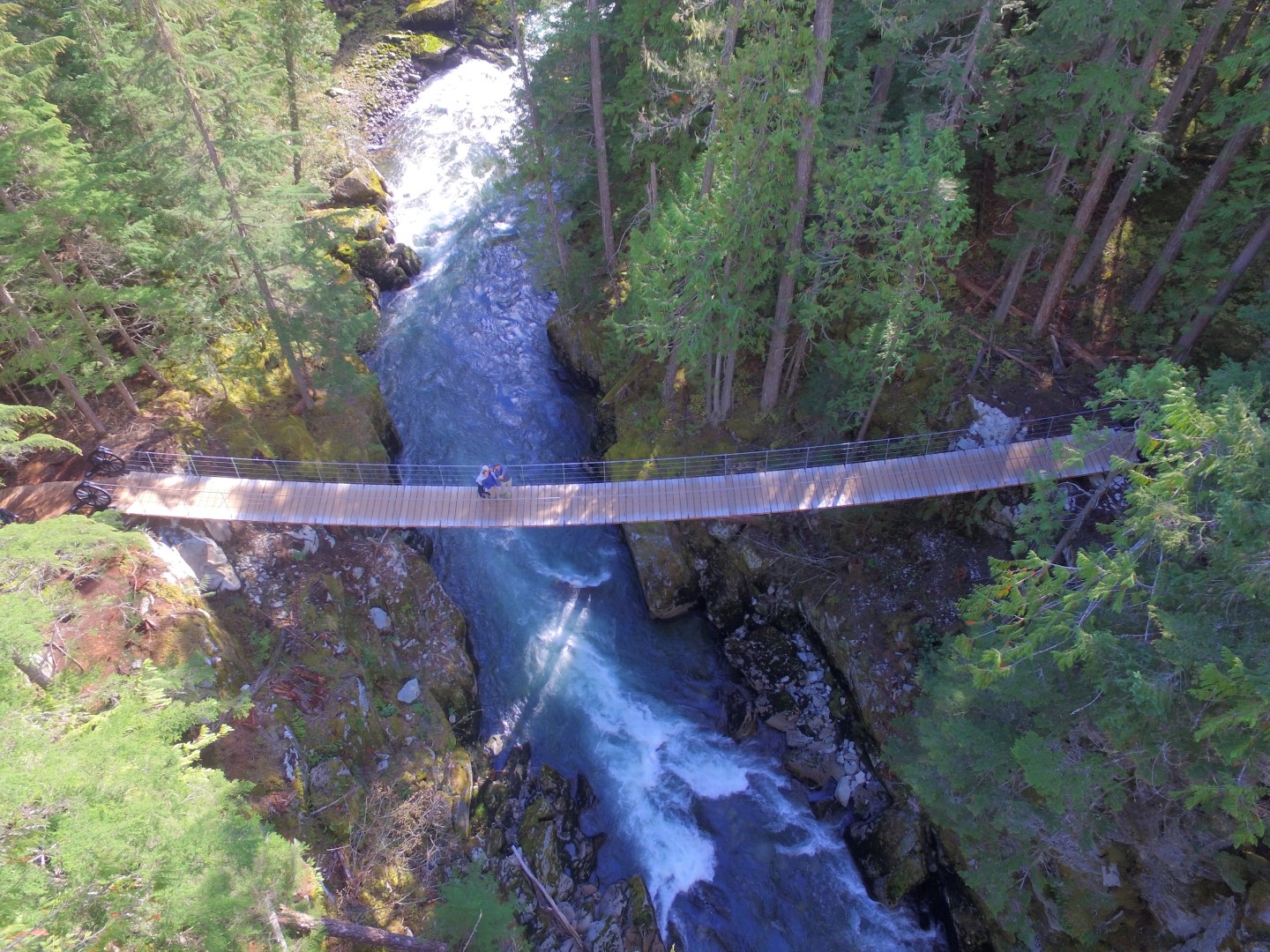 The Resort Municipality of Whistler (RMOW) is a naturally beautiful community situated within the shared traditional territories of the Squamish and Lil’wat Nations. Known worldwide as a winter skiing destination, the area is truly a 12-month-a-year destination for adventurers seeking outdoor pursuits.

The new bridges form part of a vast recreational trail network. The Municipality was operating with strict budget limits, but it desired unique attractive bridges to complement the wilderness sites. 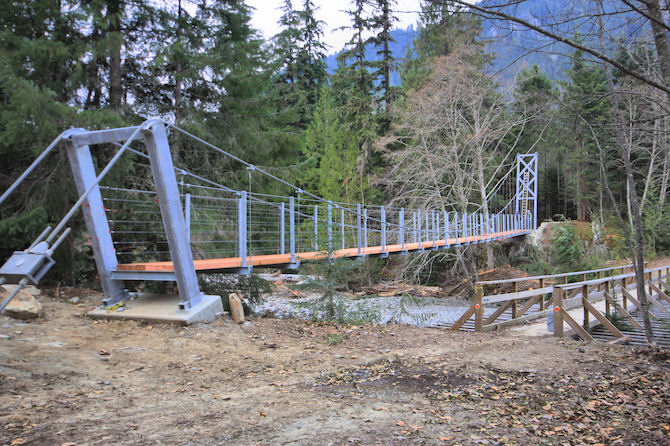 The Sea to Sky Bridge replaced a decommissioned forestry bridge, seen just to the left.

The new Sea to Sky Bridge was built to replace a deteriorated log stringer forestry bridge that was closed to the public due to safety concerns. KCB developed a 55m-long suspension bridge design for the crossing. The main cables for the bridge are anchored into bedrock using drilled-in pairs of rock anchors for each cable.

At the Sea to Sky Bridge site, an existing forestry road reduced the space available to construct the south-end bridge abutment; and bedrock for anchoring the bridge cables was irregular and unreliable. The south abutment was originally designed with micropiles down to bedrock. During construction, shallower bedrock was located near by, so KCB worked with the contractor to develop value-engineering solutions that allowed the bridge to be founded on spread footings by shifting its position slightly, simplifying the construction and reducing the bridge cost.

The initial concept also had a common suspension bridge configuration with equal height vertical towers, but the final solution was an asymmetric suspension bridge with a shorter south tower. Both towers are inclined backwards to allow for a steeper backstay angle for the main cables, enabling them to be anchored closer to the ends of the bridge.

This change created room for the forestry road to remain in service and ensured that the cables could be anchored into competent bedrock.

The deck is constructed using rough cedar planks carried by steel crossbeams and cable hangers. Additional cables are strung along the bridge to act as a railing system. The new bridge forms a key link in the 180-km long, multi-use Sea to Sky Trail 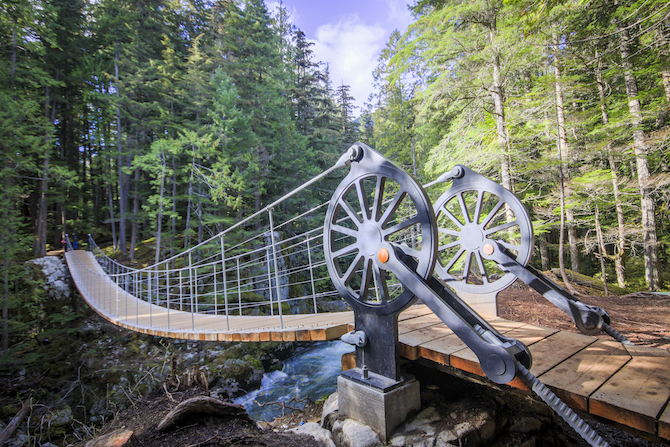 For years, the only access to the site was by a dangerous route along CN Rail tracks. The client wanted a bridge to connect the site to the Sea to Sky Trail and other popular hiking and biking routes in the region.

The solution is a 36m-long catenary cable suspension bridge with four main catenary cables. The cables connect to anchor frames at each end that are custom fabricated steel shapes designed in the form of locomotive wheels.

The bridge site is very remote, making access for regular construction equipment impossible. KCB designed the bridge abutments using light steel components to facilitate assembly without heavy equipment. The rock anchors used to secure the abutments and anchor the bridge cables were sized such that they could be installed using a mini air-track drill and air compressor that were small enough to be helicoptered to the site.

The wheel-shaped approaches serve as structural supports and architectural elements. The wheels were analyzed using two structural analysis programs to efficiently design the thickness and dimensions of the wheel spokes and strut.

A tension strut, designed to look like a strut between locomotive wheels, connects the anchor frames to a single 63mm-diameter rock anchor, transferring the loads to the bedrock behind. Rough cedar was selected for the decking, invoking railway ties.

Both bridge designs are a combination of engineering efficiency and aesthetic design, and show that pedestrian bridges can be beautiful and economical.

The client’s sustainability objectives were considered in all aspects of the project. The final bridges both have small footprints, minimizing the amount of tree clearing required at the sites. Trees that were felled were recycled to build new approaches.

Natural, renewable materials were used wherever possible, like the locally-sourced rough-cut cedar on both decks. Elsewhere, galvanized steel was used to ensure a long design life.

As the bridges cross the environmentally-sensitive Cheakamus River at two locations, minimizing impact on the river and its habitat was also a key consideration. The abutments were set well outside of the river channel so as not to affect the river flow or cause scour of the riverbanks. Significant effort was made to eliminate the need for concrete poured in the vicinity of the river. Instead, rock anchors and built-up steel abutments were used.

Overall, the bridges contribute to, enhance, and enrich the existing habitat. They demonstrate environmental responsibility and stewardship, and they serve within an educational environment for visitors and locals.