“This project is a combination of dramatic architecture with a complicated structural design to accommodate it. We gave it the special award for “social, economic and cultural benefits to the community.” The library serves as an important focal point that attracts people to Halifax. It also enhances the urban site.” – Jury 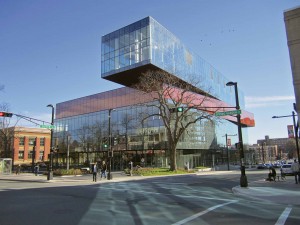 The stunning Halifax Central Library in the capital of Nova Scotia is the hub of the city’s library system. The library was ranked by CNN as one of the world’s top 10 eye-popping new buildings of 2014.
The facility is also a rich, democratic multi-generational resource centre for knowledge, learning and personal development. A vital centre for learning and culture, it blends the best of traditional library services with innovative spaces and the latest technology.
SNC-Lavalin was awarded the contract as lead structural and civil engineers for the building in a competitive request-for-proposal process. The company provided design, tender and construction phase services as a sub-consultant to the project architect. The 15,000-m2 building ranges from 4 to 6 storeys and includes a ground floor extended podium and below-grade parking.

“Stacked books” structural challenges
The structural and civil engineers found novel and sustainable solutions to meet the needs of the building’s somewhat unusual, complex, cantilever geometry. The architectural vision for the library was to have a “stacked book” appearance, but some levels were offset and rotated at various angles. The unique exterior shape was achieved with a common structural grid of concrete columns, but using tapered perimeter concrete slabs and cantilevered overhangs framed with structural steel.
Features that contributed to the engineering challenge include an atrium skylight measuring 35 x 7 metres. Twenty-three HSS moment frames were provided to support the glazed mullion framed skylight. What allowed for such a large atrium was the symmetrical positioning of the cast-in-place concrete stair and elevator cores, with one in each corner of the building. The large atrium void occupied what would otherwise have been a concrete floor diaphragm. As a result, the engineers had to pay attention to torsion and shear effects in the remaining suspended floor slab area.
Unique interior stair and bridge layouts posed an engineering challenge as well, as no two are the same. There is also a two-storey penthouse that cantilevers nine metres. This cantilever was achieved by designing custom Vierendeel trusses using structural steel plate that was fabricated into box or tube shapes.
To allow for a column-free performance space on Level 2, a transfer structure was provided as part of the Level 2 floor framing to span an unsupported length of 17.4 metres. Two post-tensioned cast-in-place concrete transfer beams were designed as part of the Level 2 floor framing and were designed to support the gravity, live and snow loads of the floors and roof above. Post tensioning is used in bridge design but has not been commonly used before in building construction in Atlantic Canada.
The method of delivery was through a construction management format that allowed for 15 separate trade packages. This format allowed for excavation and construction of the building foundations to proceed ahead of the overall final design. However the method required that the structural and civil engineering tender packages be issued early. The time difference between the earliest trade packages and latest trade packages was approximately 2.5 years.

Sustainability, urban and cultural benefits
The location of the new Central Library is on a site occupying the corner of Spring Garden Road and Queen Street in Halifax’s downtown. In the 1700s, the site was home to Bellevue House, the residence of the British Army’s Commander-in-Chief for Halifax, and before that it might have been occupied by local First Nations. One of the earliest trade packages dealt with conducting a detailed archaeological dig and investigation on the building site to record, study and preserve any discovered items.
Designed and built to achieve LEED Gold certification, the building will be socially, economically and environmentally sustainable. For a library, sustainability means that the facility must be built to last, and it must have a reduced environmental impact on an ongoing basis in its operations. It must also offer the flexibility to meet changing program requirements and it must support users’ social and cultural needs. The design team worked diligently to deliver on these commitments, integrating sustainable features and materials, including a green roof, to ensure the building’s optimal performance.
The new Halifax Central Library represents the diverse communities, talents, and creativity of the residents of the municipality of Halifax and presents them to the world. As confirmation of the extent of the public’s interest and curiosity in the project,  20,000 people attended the opening weekend in December 2014, with approximately 3,500 people in the building at a time.
Truly a civic success story, the library is a centrepiece of the provincial Capital District and a major contributor to the economic revitalization of Halifax’s downtown core.