“This was an outstanding project. It was remarkable that the engineers came up with an alternative design that didn’t require the U.S. crossing to close. They used the existing piers and slid the new bridge onto them. We thought it was really innovative, creative and courageous. We gave it the Ambassador award for international work. The ultimate beneficiaries were the people who live in the area.” – Jury 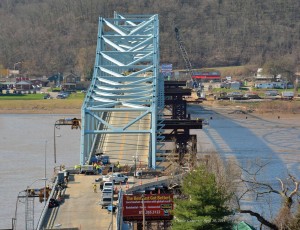 Buckland & Taylor is the Engineer of Record and the Erection Engineer for the permanent design and construction of the main spans for the new Milton-Madison Bridge, which spans the Ohio River from Milton, Kentucky to Madison, Indiana.
The old Milton-Madison Bridge, built in 1929, was narrow, deteriorating, and both functionally and structurally obsolete. However, it provided a vital link between the two communities. The joint owners of the bridge, the states of Kentucky and Indiana, determined that the most cost-effective solution, as well as the least disruptive to the historic town of Madison, was to replace the bridge on the same alignment with a completely new superstructure on rehabilitated piers.
This challenging design-build project required an innovative engineering solution that would eliminate the need for a long bridge closure, eliminate the need for a ferry and reduce construction risks associated with the schedule.
The answer to this problem was an advanced sliding procedure conceptualized by the Buckland & Taylor and Burgess & Niple design team. It involved keeping the existing bridge open to traffic while the piers were rehabilitated, constructing the new bridge superstructure alongside on temporary piers, and then sliding it into its final position atop the rehabilitated piers.
In the past, only bridges with much smaller spans have been subject to this advanced sliding technique. The longer length and continuity of the four truss spans of the Milton-Madison Bridge required the design team to adjust their procedure and scale their approach.

Longest lateral bridge slide: world record
After demolishing the old bridge and pier tops, rehabilitating four of the existing piers and constructing a new fifth main pier and approach bents, the sliding took place in early 2014, during a bridge closure of just a few weeks.
Strand jacks linked to a computerized, displacement-monitoring control system pulled simultaneously at all five main piers to slide the entire superstructure into its new position 16 metres upstream. One adjacent approach span was separately slid into place. Once the expansion joints of the bridge ends were complete, the bridge reopened to traffic in its permanent position.
The methodology led to a successful slide and a world record for the longest lateral bridge slide ever made.

One year bridge closure avoided
The bridge officially opened to traffic in April of 2014. The new superstructure is a four-span continuous steel truss bridge with new concrete girder approach spans. The deck provides wider, safer lanes, shoulders, and — for the first time ever at this crossing — a sidewalk. The main truss spans are 180 m, 180 m, 220 m, and 150 m, with 14 m spacing centre-to-centre of trusses.
The net result of the scheme saw the elimination of the ferry cost, the reduction of the total closure of the bridge from at least one year to just two closures totaling a few weeks, and a tender price that was several million dollars below the next bidder and more than $20 million under the original estimate. Keeping the bridge open through construction also kept the communities connected and in reach of vital services across the river, minimized the impact on the public, and reduced economic hardship that would have been associated with the loss of the connection.