Work is under way on encapsulating a section of the C-Train light rail line that crosses the site of Calgary's New Central Library. The site is east of City Hall in the emerging East Village, at the intersection of 9th Avenue SE and 3rd Street... 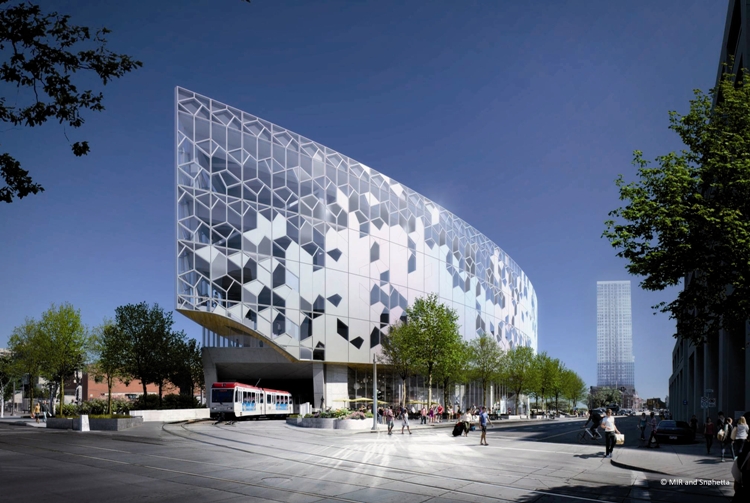 Work is under way on encapsulating a section of the C-Train light rail line that crosses the site of Calgary’s New Central Library. The site is east of City Hall in the emerging East Village, at the intersection of 9th Avenue SE and 3rd Street SE.

The $245-million, 278,000-sq.ft. library is intended to become not only the “hub and heart” of the city’s library network of 18 branches, but also a landmark building that will create a centre of activity for the public, with several gathering places and outdoor plazas.

The building design, by Snohetta and DIALOG, was shaped by the curving LRT line that crosses the site in a north to south arc and then descends into a tunnel.

The busy LRT line will be running throughout the construction, so the tracks are being encapsulated, partly to protect the line during construction of the building. However, the encapsulation structure will also be an integral part of the building’s foundations; a contiguous floor plate spans 12 metres across the existing LRT right-of-way and connects with a regular grid system for the library superstructure above.  Entuitive is the structural engineer and has used similar technology to span over active commuter rail lines for Brookfield’s Manhattan West Project near Penn Station in New York City.

For the Library building, DIALOG is the prime consultant and U.S.-based Snøhetta is the design architect. DIALOG is also doing mechanical and electrical engineering. Other consultants besides Entuitive (structural) are SMP (electrical) and Associated Engineering (utility relocation). MHPM is the project manager.

The land in front of the library building is terraced up and over the train tracks. At the top of the slope the building is lifted above grade on columns at certain points. The main entrance is a curving arch “gateway” framed in wood. Above it the building walls rise five storeys, with an envelope that is a striking assembly of transparent and fritted glass panels in diamond-like patterns. Inside, a central curving full-height atrium floods the open space with natural light.

After the design for the library was selected in an architectural competition in 2013 there were two years of public engagement. These consultations culminated in an open house on September 4 this year that attracted more than 1,000 Calgarians. They especially wanted the library to include lots of natural light and a range of public gathering places.

The project is being developed by the Calgary Municipal Land Corporation and is part of a large master-planned neighbourhood. East Village will be home to more than 11,000 residents upon its completion in 2027, with amenities like River Walk and St. Patrick’s Island Park and the new National Music Centre besides the library.

To see videos about the project and construction, click here.

Calgary’s New Central Library. The open entry provides a visual and pedestrian connection between the East Village and Calgary’s downtown.