Catherine Karakatsanis, P.Eng., the chief operating officer at Morrison Hershfield, is this year’s recipient of the Gold Medal from Engineers Canada, acknowledging her lifetime of industry achievements. 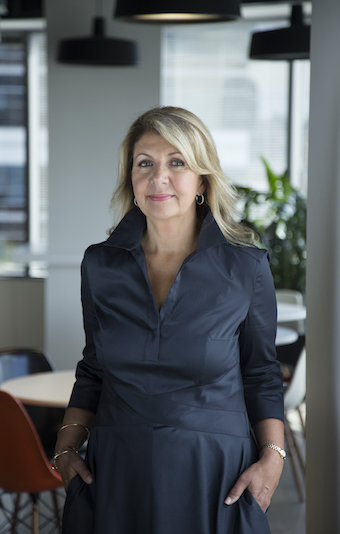 Adding to a long list of recognitions and awards, Catherine Karakatsanis, P.Eng., the chief operating officer at Morrison Hershfield, is this year’s recipient of the Gold Medal from Engineers Canada, acknowledging her lifetime of industry achievements.

Karakatsanis joined MH after graduating as a structural engineer and rose to the level of COO in 2012—overseeing the firm’s operations across Canada, the U.S. and internationally. In addition, her volunteer service to the industry has been inspirational.

We contacted Catherine prior to the Engineers Canada Awards ceremony, which was held May 23rd in Quebec City.

What led you into an engineering career?

I believe I was destined to be an engineer when I was placed in a special math program to study algebra in grade one—it was a foreshadowing of my future choice for a profession. I continued to love and excel in math growing up, and because some of my cousins were engineers, I was aware of the profession at a young age and early on appreciated what an important role engineering has in making our world a better place.

How has your role evolved over the years?

My role in the firm has certainly evolved, and not one I mapped out for myself. I thought I would spend my entire career doing structural engineering. Then the early nineties major recession set in, and I am grateful to Morrison Hershfield for the opportunities they presented that kept me employed. I had to branch out, and so I have worked in almost every area of our company. I was rewarded by becoming the first female partner since our firm was founded in 1946, the first female executive and board member, and now as COO I am responsible for providing business leadership and overseeing 900 professionals.

Your volunteerism has included leading the OSPE, PEO and Engineers Canada—what has been the greatest benefit to you?

I cannot pick out one great benefit. I do think that my volunteer work has helped me professionally, in that it gave me the opportunity to learn from many diverse, talented people. It has also given me many opportunities for leadership roles—even before I was ready for them. I have learned more from my volunteer work than I could have ever imagined.

The Engineers Canada Gold Medal is a national recognition of achievements. What are your most compelling accomplishments?

I never thought of it when I started, but looking back and having talked to so many other female engineers over the years, the fact that as a woman I have been able to succeed is surprising to me and a highlight.

I started my career by working and doing my graduate studies at Western University’s Boundary Layer Wind Tunnel Laboratory—a world-renowned facility—so I started out very inspired. Then I came to work for an equally inspiring firm, Morrison Hershfield. I am proud of the company that I have helped build, from less than a 100-person firm when I started to over 1,200 people now, all the while maintaining our collegiality, professionalism and reputation for technical excellence.

It has also been a highlight and a huge privilege to serve my profession by being elected to lead OSPE, PEO and Engineers Canada.

What is your message to female engineers seeking to take on leadership roles?

The future for women in engineering is very exciting. Today we are looking at a different paradigm of leadership, and it plays naturally to the strengths of women. At the same time, I think it is very important for women to be selective in choosing the company and the people they work with so that they are supported, respected and appreciated.

Can gender imbalance in the engineering industry be solved?

Respected studies have shown that it is the culture of the workplace that drives women out of a company and the field altogether—in fact 50% of them. The best way to change these cultural challenges is to firstly acknowledge that they exist—talk about them, openly, candidly. It is only by talking about these issues that firms can begin to do the necessary things to address them and help eliminate bias and improve corporate culture. The low attraction and retention of women in engineering is a complex problem, but I know we can do this—after all, we’re engineers, and solving complex problems is what we do.

If not an engineer, what do you think you would you have become?

If not an engineer I think I may have been a scientific researcher or in medicine. I do like research and science.