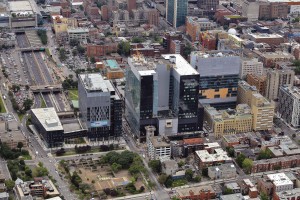 Phase I CHUM hospital complex under construction in downtown Montreal. (The completed CHUM Research Centre on the left was by another consortium). Photo: Helico/Construction Sante Montreal.

Locating the plant. Locating the heating, cooling and emergency generator plants for an urban hospital complex presents a challenge. Traditionally a plant of this size would be located at grade in a separate building where it could be isolated from the clinical functions of the hospital. However such space did not exist on the CHUM site. The initial schemes positioned the plant below grade, but the real estate proved too valuable and was needed for clinical functions.
HH Angus developed a scheme to locate the plant 80 metres in the air above the ambulatory block. The boilers and chiller share one level, and the generators and cooling towers share another. These floors sit on top of an air handling plant room, forming a volume 30 metres high, fully enclosed with louvres. With this location, the design had to overcome challenges for the mitigation of noise and vibration.
The central plant consists of six dual fuel hot water heating boilers with a total output capacity of 30,900 kW, six dual fuel steam boilers and one electric boiler totalling 47,000 kg/hr. In addition to serving the needs of CHUM, the heating plant also supplies CRCHUM, the adjacent research centre, with steam and hot water. The cooling capacity is 9,000 tons in two multistage process chillers, two centrifugal heat recovery chillers and five conventional chillers.

Ventilation systems and heat recovery. Ventilation in a hospital is the system that requires the most plant space, not only in terms of plant room floor area, but also for vertical shafts and ceiling space. The RFP imposed a number of requirements, including HEPA filters on all systems serving clinical areas, no air recirculation between departments, and a high level of redundancy — all with a limited air handling unit size. To meet these requirements would have required two full intermediate mechanical floors and at the same time would have severely compromised the system’s future flexibility. HH Angus worked with CHUM to develop an alternative approach.
Where the RFP required a distinct air handling unit for each department, we proposed the use of 100% outdoor air units serving multiple floors where the occupancy was similar, and demonstrated to the hospital the merits of this approach from the perspective of infection control and future flexibility.
To mitigate the energy penalty of 100% fresh air systems, we proposed enthalpy heat recovery wheels. The RFP initially prohibited these wheels, but we used our 25+ years of successful experience with the technology to demonstrate to CHUM and their compliance team that their infection control concerns could be successfully mitigated with the right components and controls. The RFP was then modified accordingly.
The RFP also mandated a standby air handling unit for each unit serving a critical care space. This solution would have required much higher capital and operating costs over the life of the building, as well as more space. We developed an alternative approach by combining a number of air handling units together into one duct system to share the redundant capacity. This solution considerably increased the overall reliability of the systems while reducing operating costs.
Lastly we demonstrated that the restriction on air handling unit size could be raised to 33,000 l/s without any practical impact. Even so, 46 air handling units are required for a total supply volume of 1,300,000 l/s.
Combining these alternative approaches in the ventilation system design resulted in many benefits, including the ability to modify the occupancy of the spaces and enable future renovations. The net result was that additional clinical floors could be constructed under the zoning height restriction, which was a key factor in developing a successful bid.
Operating suites. The 39 operating rooms (ORs) had to be spread over two floors, even with a floor plate the size of two football fields. HH Angus located a main air handling plant room on the floor immediately above to enable direct servicing of the ORs. The supply and return terminal boxes as well as the terminal humidifier for each OR is located in the plant room, reducing the need for maintenance personnel to enter the ceiling space of the sterile area.

Plumbing and medical gas. The domestic water supply in a typical hospital may consist of one or possibly two pressure zones. For CHUM, with a difference in height of 120 metres from the lowest mechanical room five floors below grade to the roof, five separate pressure zones had to be created. The scale of the medical gas system is unprecedented: over 11,000 outlets.

Electrical distribution. The project required understanding the crucial demands placed on a hospital’s electrical system and knowledge of the intent and intricacies of codes and standards. Our team designed an electrical system that is robust, reliable and resilient, and one that met the owner’s RFP requirements in a cost-effective manner.
The high voltage distribution system includes 25kV and 4160V switchgear, with four incoming Hydro Québec lines totalling 36MVA. The emergency power generation system for the CHUM complex consists of four 2.5 MW diesel generators, generating at 600V, with four 2.5 MW back-up generators producing 4160V.

Lighting, fire protection and security systems. Lighting layouts were designed to balance the aggressive LEED requirements with CHUM’s stringent requirements for light levels. To provide an atmosphere that is elder-friendly efforts were taken to ensure even illumination, with gradual changes between adjacent spaces. The lighting is controlled by a building-wide lighting control system.
The addressable two-stage fire alarm system is combined with the public address system. Two complete CACF (central alarm and control facility) rooms were provided.
The security systems include CCTV, card access, intercom, and a real-time locating system. The card access system and CCTV system are IP based using POE (power over ethernet), which minimizes the risk of down time by using a centralized UPS system.