Controlling phosphorous, not nitrogen, the key to reducing algal blooms 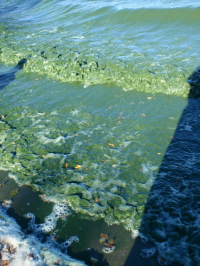 New research has emerged in dealing with the problem of algal blooms in freshwaters.  After many scientists and authorities have said that it’s necessary not just to control phosphorous entering water bodies, but also to control nitrogen inputs, a new study suggests that is not the case. Instead, a group of scientists led by a professor at the University of Alberta are urging governments to concentrate on controlling phosphorous alone, which is much less costly.

On August 18, the University of Alberta said an article had been published in Environmental Science & Technology reporting on studies led by professor emeritus, David Schindler.

The article reported on a study of 37 “whole-lake” studies of the impacts of phosphorous and nitrogen on algal growth.  Schindler’s team found that controlling nitrogen alone, or nitrogen with phosphorous, “showed no discernible effect on algal blooms.”

But phosphorous reductions had successfully reduced algal blooms in water bodies ranging in size from small ponds to Lake Superior, and with a wide range of climatic and geological conditions.

The release of phosphorous into fresh water bodies has been regulated since the 1970s in North America and Europe, but in the last 10 years some scientists have said that nitrogen inputs also need to be controlled.  The European Union requires that nitrogen be removed from sewage effluent,  and the U.S. Environmental Protection Agency has indicated it will partner with states to control both phosphorous and nitrogen.

Schindler says the recommendations to reduce nitrogen were based on short term and small-scale tests which poorly represent the long-term responses of whole lakes.

In the only long-term study where the input of nitrogen alone was reduced, the proportion of cyanobacteria, or blue-green algae, actually increased.

In the study of lakes where nitrogen and phosphorous were both decreased, the decline in algae correlated only with declining phosphorous.  Excess nitrogen was either denitrified or accumulated in dissolved form.

One of the study’s co-authors, Diane Orihel of the University of Ottawa, said, “In many ways, our conclusions are good news. Controlling inputs of phosphorus is much less costly than controlling nitrogen, and estimated costs of reducing both elements range from four to eight times higher than reducing phosphorus alone.”

She did have a proviso: “While nitrogen removal is not necessary to control algal blooms in lakes, it is causing problems with soil acidification and groundwater pollution in some areas.”

She added : “There are many reasons to control nitrogen pollution, but freshwater eutrophication is not one of them.”

To see the University of Alberta press release, click here.