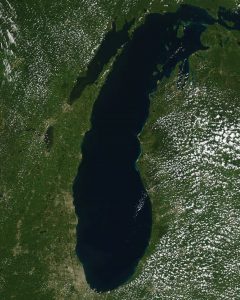 A coalition of over 120 cities in the U.S. and Canada, representing 17 million people, has written to President Obama and Prime Minister Trudeau asking them to stop a diversion of water from the Great Lakes.

Mayor Denis Coderre of Montreal is the chair of the Great Lakes and St. Lawrence Cities Initiative (“Cities Initiative”) which is taking legal action to challenge the decision to allow the city of Waukesha in Wisconsin to divert water from Lake Michigan.  They say it sets a bad precedent and that the diversion does not meet the conditions of a formal agreement.

The Waukesha diversion was approved by the Great Lakes-St. Lawrence River Basin Water Resources Council, which is an organization of the U.S. states that border on the Great Lakes formed in 2008 to manage the resource. They are  known as the “Compact Council” for short.

In a press release of August 23, Coderre said: “For the Compact Council to grant an exception to the first application that does not meet the conditions of the compact sets a very bad precedent. To make sure the Compact and Great Lakes are not compromised in the future, this decision should be overturned.”

Mayor Paul Dyster of Niagara Falls, New York, vice-chair of the Cities Initiative said: “This decision opens the door to every neighboring city and county [on] the Great Lakes and St. Lawrence Basin in the U.S. and Canada to get water from the basin without meeting the conditions of the Compact.”

The mayors said they were disappointed with the public consultation process, which was held in Waukesha (“hardly representative of the people in the region”).

Their opposition also hinges on other factors.  They suggest Waukesha has other reasonable alternatives for water supply. They are also concerned about the impact of the return flow of the city’s sewage on the Root River, and the fact that the service area includes communities that are not part of the city of Waukesha.

For its part, the city of Waukasha says they are only borrowing and returning the Great Lakes water. In a statement on June 22 following the approval of the diversion, Mayor Shawn N. Reilly said that the city has studied the issue for over a decade, and that they had no reasonable alternative. He said: “The recharge of our aquifer is limited due to local geology. Our water is contaminated with naturally-occurring radium, a carcinogen. We will return approximately 100% of the volume of water that withdraw.”

To read the statement by Mayor Reilly of Waukesha, Wisconsin of June 22, click here.