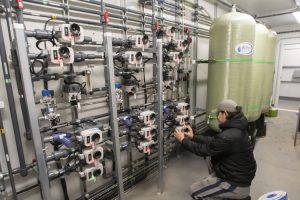 The awards program is jointly produced by Canadian Consulting Engineer magazine and the Association of Consulting Engineering Companies – Canada (ACEC). Each year, the Schreyer recognizes the project that best demonstrates technical excellence and innovation. WSP’s effort, which aims to deliver clean water to communities across Canada and around the world, was so inspiring to this year’s jury, it also won the Outreach Award. 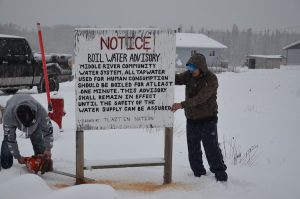 Other top honours this year include the Engineering a Better Canada Award, which was presented to Entuitive for its contributions to Calgary’s landmark New Central Library, and the Ambassador Award for projects outside Canada, which recognized COWI’s work on the Mario M. Cuomo Bridge in New York, N.Y.

These four entries were singled out for the five highest honours from among the Top 20 Award of Excellence winners, the other 16 of which are listed below.

Also at the gala, ACEC presented its 2019 Beaubien Award to François Plourde, P.Eng., for his lifetime of contributions to consulting engineering and the 2020 Allen D. Williams Scholarship to Nicholas C. Kaminsky, P.Eng., PMP, of KGS Group.

For more details about all of the winners, watch for the October/November 2019 issue of Canadian Consulting Engineer magazine. And throughout November, be sure to follow the #20DaysofExcellence in engineering campaign on Twitter and at www.acec.ca/20daysofexcellence to see videos of the winning projects and to learn more about the impact of consulting engineering on quality of life. 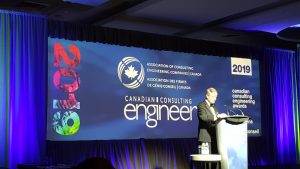