May 25, 2004
by Canadian Consulting Engineer 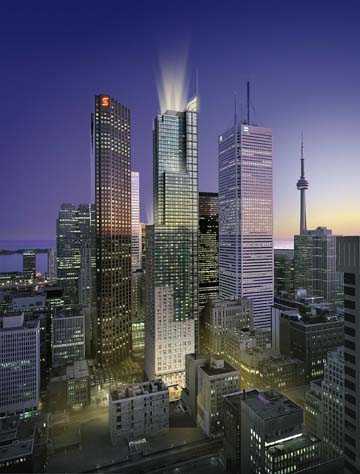 Yolles Partnership is the structural engineer for the planned Trump Tower in Toronto. Billionaire Donald Trump was in Toronto last month to boost the project.
The tower will be the tallest residential building in Canada. Located at Bay and Adelaide Streets in the downtown core, it is to be 68 storeys and 308 metres tall.
The lower portion of the building up to the 32nd floor is a hotel; the 33rd and 34th floors will be a health club, spa and viewing lobby. Above that level will be the luxury condominiums, priced at $500,000 to $1.5 million.
The mechanical and electrical engineers on the project are Hidi Rae Consulting Engineers. The architect is Zeidler Partnership and the builder is Ellis Don.
The project still has some planning approvals to obtain and won’t start construction until sales have met target.
One Wall Centre in Vancouver is Canada’s most recent residential tower. Completed in 2001, the tower is 48 storeys high.