Brookfield Place Calgary will eventually occupy a full block between 1st and 2nd Streets and 6th and 7th Streets.

A new skyscraper in Calgary’s core is nearing its final height. When completed in 2017 it will be the tallest building in Western Canada.

Brookfield Place Calgary will eventually occupy a full block between 1st and 2nd Streets and 6th and 7th Streets. The east tower, under construction now, will reach 56 storeys and 247 metres tall in a few weeks. It surpasses The Bow, the office tower that is 236 metres high and has been a distinguishing mark on the city skyline since it was completed in 2012.

DIALOG is the executive architect (Martin Sparrow and Cameron Veres) of the Brookfield tower, with design architect AFK.  Entuitive are the structural engineers, TMP are the mechanical engineers, and Mulvey + Banani are the electrical engineers. Ellis Don is the contractor.

The tower is designed with rounded and tapered corners from top to bottom, and has a curved tower top “crown” with frameless clear glass. Overall the complex is being designed to be certified as LEED Gold for Core & Shell. 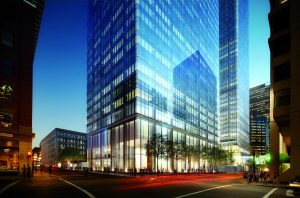 Plans call for the development to have a large south-facing public plaza at the base, which will be “embraced” by a 4,645-square metre glazed urban pavilion. This civic area will be connected to Calgary’s +15 enclosed pedestrian network.

During the demolition of buildings to make way for the development, the historic “Hegel” building facade was saved and catalogued.  It will be incorporated in the second tower.