The Ontario Public Works Association (OPWA) handed out its annual awards on January 28.
Stantec won Project of the Year Award in the Transportation, $2-10 million category for the Conlin Road West project in Oshawa, east of Toronto. Stantec served as prime consultant on the $10-million project, which includes a new four-lane realigned roadway, the replacement of a two-lane bridge with a four lane bridge, and Oshawa’s first modern roundabout. The roundabout is at the intersection of Thornton Road North and Conlin Road West and was designed by GHD. Also involved was the realignment and naturalization of approximately 350 metres of Oshawa Creek, along with improvements to the storm water run-off system.
Gord Murray, who was senior project manager for Stantec, noted the close and flexible partnership the company had with the city of Oshawa, the Central Lake Ontario Conservation Authority (CLOCA); and the federal Department of Fisheries and Oceans. And, he said, “I’m especially gratified by the way we were able to work together to blend engineering solutions with environmental protection and environmental sustainability. This was a model project.”
The project supports growth in the northwest area of the city that includes new residential subdivisions, university and college campuses and the Highway 407 Extension.
Another winning firm was R.V. Anderson Associates (RVA), which has won an OPWA Project of the Year Award every year since 2008.
This year it won two Project of the Year Awards: one for a project in Niagara Region and a second for a project with the City of Greater Sudbury.
The first award went to the Dominion Road Sewage Pumping Station and Force Main project in the Structural, $2 million-$10 million category. RVA provided project management, design, and engineering services to the client, Niagara Region. The $8-million project replaced the existing sewage pumping station that serves the town of Fort Erie, as well as replacing 3.5 km of force main, and 2.5 km of local roads. Challenges included a constrained site, and the need to keep the existing station operational while the new station was under construction. 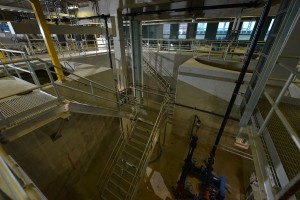 The second winning project by R.V. Anderson Associates is the Sudbury Wastewater Treatment Plant Head House Upgrades, which succeeded in the Environment, $10 million-$50 million category. RVA provided project management, design, and engineering services during construction of this $11-million project, which maximized the use of existing infrastructure and achieve cost savings. The Head House was experiencing operations and maintenance issues and would have cost approximately $30 million to replace. Instead RVA used an innovative sequencing plan to build the new wastewater treatment works on top of the existing one. This way, service to 95,000 residents remained uninterrupted throughout construction and the City of Greater Sudbury was able to save $19 million compared to the original replacement plan. The upgrade also eliminated the need for an intermediate pumping station, allowing the City to save approximately $125,000 per year in energy costs.