AECOM is involved with the design of both the NE and NW portions of the new Stoney Trail Ring Road around Calg... 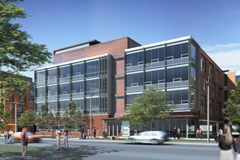 AECOM is involved with the design of both the NE and NW portions of the new Stoney Trail Ring Road around Calgary due to open in November. The NE portion from Deerfoot Trail to 17 Avenue SE is being done as a public-private partnership by the Stoney Trail Group consortium, of which AECOM is a member. This portion of the ring road has a budget of $650 million and includes 21 kilometres of four and six-lane roadway, and 23 bridge structures. The NW portion is worth $425-million and is being designed as a traditional project, with AECOM doing design and construction management.

ADI Technology of Fredericton, New Brunswick has secured a contract in Easter Island, Chile for its wastewater treatment technology. The ADI-MBR system is being installed at the Hanga Roa Hotel on the remote South Pacific island famous for its ancient giant stone heads.

Stantec has secured a multi-year contract with Chevron, the energy corporation. The work will include providing environmental assessments, doing remediation and compliance audience. Stantec’s environmental practice was to begin working immediately at Chevron’s offices in North and South America, Asia Pacific, the Middle East, and Russia.

The Niagara Health System has just announced that the Plenary Group will design a large 375-bed acute care hospital in St. Catharines, Ontario. The Plenary Consortium includes PCL Construction, and Bregman + Hamann as architects. Smith and Andersen (Kevin Sharples) are mechanical and electrical engineers, Halsall (Michael Buckley) is structural engineer, and A.M. Candaras is doing civil engineering. Located in the west end of the city, the hospital will replace aging existing hospitals and will include everything from cancer care to long-term mental health and ambulatory services.

A Nuclear Science Research Centre began construction in August at the University of Ontario Institute of Technology (UOIT) in Oshawa, Ontario. The 9,290-sq.m. facility will also provide courses in wind, solar, hydrogen, hydraulic, goethermal and nuclear energy. Costing $45.4 million, it will be completed in 2011. Architect and structural engineer is Barry Bryan Associates. Mechanical engineer is Crossey Engineering. Electrical consultant is Kirkland Engineering.