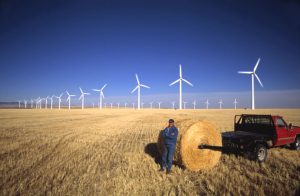 On September 19 the Government of Saskatchewan released new environmental siting guidelines for wind energy projects. They say the guidelines are designed to protect the environment and provide more certainty for developers planning such projects.
They have set a five kilometre buffer zone around designated environmentally sensitive “avoidance” areas such as national and provincial parks, ecological reserves,  bird areas and key rivers.

In addition, even outside avoidance zones, proponents will still be required to evaluate projects to ensure any potential environmental and wildlife impacts are  mitigated.

The province says the guidelines were developed with industry and environmental stakeholders.
“This framework will allow SaskPower the flexibility to work with wind energy developers to meet its goal of achieving 50 per cent renewable capacity by 2030,” Environment Minister Scott Moe said.

– ensuring the site and associated infrastructure are reclaimed and restored to pre-development function;

– offsetting residual impacts, including disturbances to landscape; and

– monitoring outcomes to prove the success of mitigation actions.

The Canadian Wind Energy Association, CanWEA, said it was pleased with Saskatchewan’s guidelines.

CanWEA President Robert Hornung said the province  “has produced a results-based document that provides guidance for the wind energy industry as it works to limit impacts on biodiversity throughout the province, while working to meet the provincial commitment to 30 per cent wind generation capacity.”