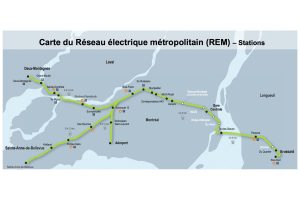 A coalition of public transit experts, environmental groups and trade unions have called for a public inquiry into plans for a huge light rail network in the Montreal area. In April the Caisse de dépôt et placement du Québec  infrastructure investment arm, CDPQ Infra, announced  plans to construct the largest public infrastructure project since the city’s metro was opened 50 years ago.

The “Reseau électrique métropolitain (REM) would be automated and would cover  67 kilometres, linking downtown Montreal with the South Shore, the West Island, North Shore and the airport.

Saying the REM is “On the Wrong Track,” the coalition opposed say they are “sounding an alarm bell,” pointing to “countless problems and anomalies with respect to the light-rail project.”

The “Trainsparence”  coalition has called for a parliamentary committee to evaluate the project and has tabled a petition with the Quebec  National Assembly.

In a statement, the group said: “This project was conceived by the private sector for the private sector, and is not in the public interest. It does nothing to decrease greenhouse gases; it infringes on protected green spaces; and offers no protection or guarantees to users with respect to fares.”

Denis Bolduc, spokesperson for Trainsparence and president of SCFP-CUPE Quebec, also suggested there was a lack of necessary information and that in the light of the Charbonneau Commission and the massive amounts of public money at stake, “we must remain vigilant.”

To read a report on the REM, click here.