Provincial government engineers say the investigations should have gone further and looked into need for more project oversight. 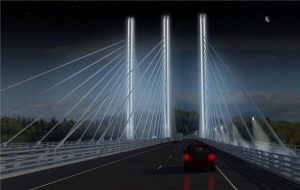 The Ontario government has issued its long awaited update about what happened to cause the Nipigon River Bridge deck to lift dramatically during a freezing snap in January.

On September 22, Steven Del Duca, Minister of Transportation, and Michael Gravelle, Minister of Northern Development and Mines and MPP for Thunder Bay-Superior North, gave the update after visiting the bridge, which is on the Trans-Canada, Highway 11, 100 kilometres east of Thunder Bay.

The $106-million project is Ontario’s first cable-stayed structure and still partially  under construction. The western half had opened to traffic in November, but during high winds and cold weather the deck lifted almost  60 centimetres.

The Ministers said the investigations had found three main factors were responsible for the lifted deck, including the design of the shoe plate and its flexibility. They said the fault was not with the bolts themselves, as has been previously suggested.

According to their statement: “The engineering reviews found that three main factors led to the malfunction: first was the design of the shoe plate and its flexibility; second was a lack of rotation in the bearing that was constructed; and third was improperly tightened bolts attaching the girder to the shoe plate. When combined, these three factors produced the malfunction. Neither cold temperatures nor wind contributed to the closure.”

A permanent retrofit solution has been developed to address the problems. That design will be reviewed by Associated Engineering and ministry engineers. This review will also be applied to the other sections of the bridge that are still being constructed.

The repairs are expected to cost between $8 and $12 million.

The organization Professional Engineers Government of Ontario (PEGO), said it was disappointed with the government’s findings because the investigation had not looked at the deeper causes into the failure.

PEGO issued its own statement, saying “… it is clear that the mandate was not comprehensive to include examination of the processes or safeguards that failed to prevent the unfortunate sequence of events despite numerous decision points in the process where sufficient expertise may have identified the dangers prior to the failure….

“The power of oversight cannot be overstate,” PEGO continued. “Both the independent and Ministry reports for Nipigon identify a number of such events where proper oversight could have forestalled the future failure including: review of Contract and Specification requirements for the bearings; review of Requests for Clarification for the design of the bearing; review of the bearing fabrication drawings; review of the non-conformances related to the length of the bolts, the improper installation of the bolts; the failure to tighten the bolts, and most importantly the opening of the bridge to traffic prior to the correction of the non-conformance related to the bolt lengths.”

When the bridge failed in January, traffic had to detour to Sault Ste. Marie and the U.S. as Highway 11 was the only route west. So the government is initiating a route planning study and environmental assessment for an emergency detour route.

To read the Government of Ontario September 22 statement, click here.

To read a report about the incident in January, click here.