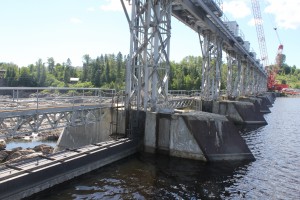 Stantec and its client NB Power won the top-ranking Pinnacle Award for the Grand Falls Hydrofacility Coffer Dam. In order to carry out repairs to some of the original 1926 spillways that were hard to reach by crane, the team turned an existing cofferdam into a floating cofferdam. Stantec provided the structural, mechanical and electrical engineering for the flotation system to allow the cofferdam to be floated in the river and then lowered into place at the various spillways.

Three awards of merit were also given out at the celebrations, which were held at the Fredericton Convention Centre on February 4.

One went to exp. Services and the City of Fredericton for the Smythe Street/Route 8 Roundabout. This multi-lane roundabout on a divided four-lane highway is one of the first of its type in Canada. It handles 25,000 vehicles a day since opening in September, and reduces congestion.

Finally, Crandall Engineering won an award of merit for the Revitalization of Main Street in Shediac, N.B. The first phase of the project was completed on schedule and within budget in 2015. It involved streetscape and landscape features aimed at creating a vibrant downtown that is friendly to cyclists and pedestrians, while continuing to accommodate the high traffic volumes generated by tourism.

To see a brochure about all the ACEC-NB awards entries and winners, click here.