B.C. has obtained permission from the National Research Council to use the encapsulated mass-timber construction provisions from the 2020 National Building Code through a jurisdiction-specific regulation. 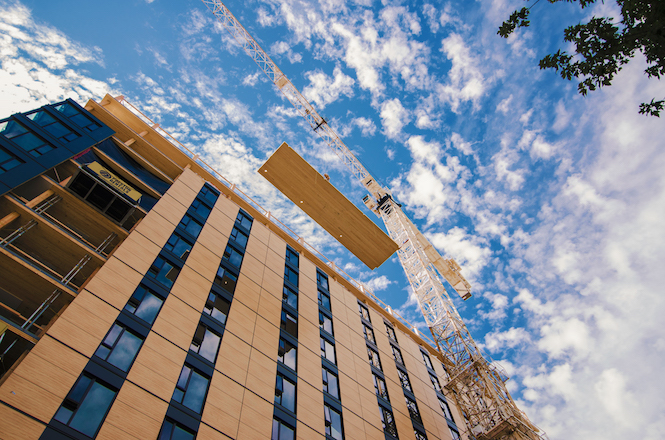 The province has let is be known that local governments are invited to become early adopters of mass-timber technology for construction of buildings up to 12 storeys—up from the current allowance of six storeys.

B.C. has obtained permission from the National Research Council to use the encapsulated mass-timber construction provisions from the 2020 National Building Code through a jurisdiction-specific regulation.

A mass timber building uses either solid or engineered wood for the primary load-bearing structure. Encapsulated mass timber is where the mass timber components are surrounded by fire-resistant materials like drywall.

“Mass timber technology allows faster construction where large sections of a building can be manufactured in a plant and then assembled on site,” said Selina Robinson, Minister of Municipal Affairs and Housing in a release following the event.

The release from the province observes that mass timber buildings can be one-fifth the weight of comparable concrete buildings, while still meeting performance standards for safety, structural resilience and fire protection.

It also notes the environmental benefits of mass timber. Using the 18-storey UBC Brock Commons building as an example, it cites the estimated carbon benefit from the wood used was equivalent to taking 511 cars off the road for a year.

“B.C. firefighters are pleased to welcome the great potential that mass engineered timber construction will bring to our province,” said Gord Ditchburn, president, B.C. Professional Fire Fighters Association (BCPFFA). “We support a building code process that balances the efficiencies and progress of industry with the needs of public safety and first responders. Wise decision-making means having everyone at the table and the BCPFFA has appreciated being involved. Including firefighter safety as an objective of the 2020 National Building Code is imperative to maintaining this balance.”

The announcement allows local governments currently regulated under the BC Building Code to be eligible to move forward with a mass timber building up to 12 storeys, provided:

Other local B.C. news media reaction to the announcement can be found here or here: