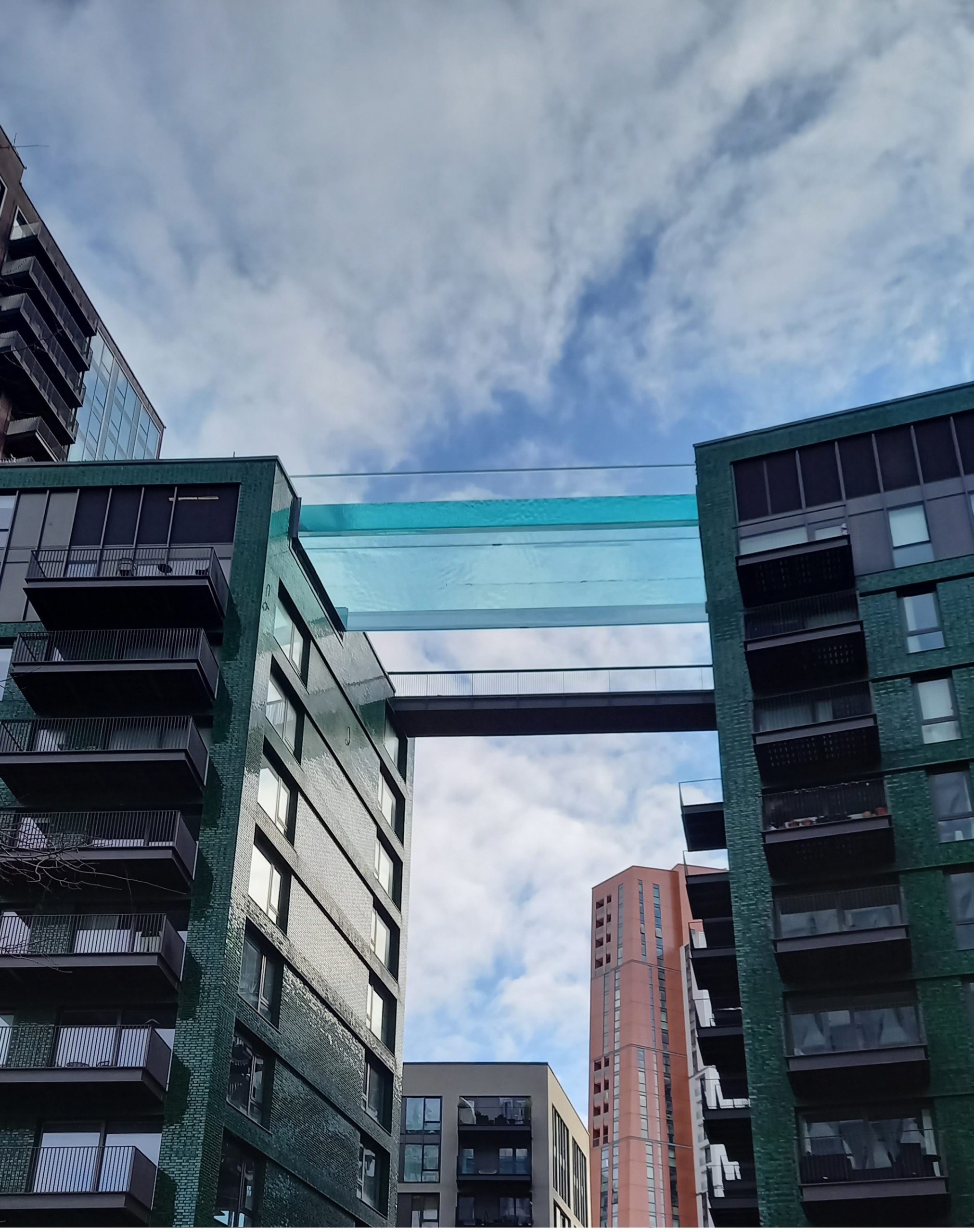 Reynolds Polymer Technology Inc., a Grand Junction, Colo.-based design firm with a history of pushing the envelope of what can be done with acrylic, achieved a new milestone: in partnership with international property developers Ecoworld Ballymore Group, Reynolds has created what’s being called the world’s first “floating” swimming pool in London, UK.

The pool, which spans 82 feet across two buildings 115 feet in the air, consists of a single solid 14-inch-thick piece of acrylic made from totally transparent polymer, and is part of the Embassy Gardens complex.

The design of Sky Pool was built to appear simple to the public, but Reynolds officials describe the concept as “incredibly complex”. “It’s a three-dimensional structure carrying the weight of the water, as well as sustaining its pressure, spanning across a considerable distance at height, subject to wind loads, temperature fluctuations and building movements,” they said.

The project took four years to complete, the first six months of which were spent just exploring the concept with plenty of discussion on design data and safety measures. “Manufacturing and engineering of the Sky Pool has pushed the envelope of what can be done in large acrylic structures,” said Paul O. Gardner, vice president of engineering, quality, and safety at Reynolds. “The team in Grand Junction has overcome incredibly tight tolerances and requirements to arrive at a finished project”.

Having built the acrylic piece in Grand Junction, shipping proved to be another major task of the project. “Transporting such a large structure, which weighs 122,000 pounds, from Grand Junction to London required police escorts, road closures, removal of traffic lights and street signs, as well as a full day closure of Nine Elms Lane which spans along the River Thames in London, as the pool arrived via the water,” Reynolds officials said.

“The design and engineering that went into Sky Pool involved many people across multiple continents,” Reynolds CEO Declan McLaughlin said. “Sometimes you are presented with challenges that seem insurmountable, and Sky Pool was one of those. However, it inspired our organization to go above and beyond and execute an inspirational iconic idea of a floating pool. Incredibly proud to be part of this once in a lifetime legacy challenge.”

The Sky Pool project is the latest in a line of acrylic constructions from Reynolds. The firm designed the Rain Vortex at Jewel Changi Airport in Singapore in 2019, said to be the world’s tallest indoor waterfall; and that same year it supplied a 26-foot acrylic panoramic window for an underwater restaurant in Norway.