Rodney Wilts of Windmill Developments listed off a plethora of promising new green building technologies at The Buildings Show/Construct Canada on December 3 in Toronto.

Wilts’ company is dedicated to sustainable developments, with a portfolio that includes Dockside Green in Victoria, B.C. and the recently completed Eddy condominium in Ottawa. Windmill is also redeveloping the former Domtar lands in Ottawa and Gatineau under the name of Zibi. The company says on its website, “We believe that developers have a responsibility to be positive agents of change, and are committed to changing the current development paradigm…. We are providing positive and achievable examples of how development can, and should, be happening.”

Wilts first noted that as green building is becoming a “matter of course,” designers are looking for new ways to distinguish themselves. They are signing on to new initiatives such as One Planet Living and programs like the Passive House Institute.

Then he zipped through an eclectic range of new technologies that are already proving themselves. Among them were:

– Algae-filled glass curtain walls on the BIQ building in Hamburg, Germany. The microalgae grows within the glass and provides shade to the interior. It is then harvested and shipped offsite to produce energy.

– SolaRoad. A bicycle path near Amsterdam in Holland that has solar panels embedded in its surface. The solar panels are protected below a layer of skid-resistant tempered safety glass and set in concrete paving slabs. They’re expected to generate 70 kWh per square metre per year and are performing well.

– GlasPro Bird Safe Glass. The glass has a coating that humans cannot see, but which appears dark blue to birds so they are deterred from flying into it. If adopted widely the coating could save millions of birds’ lives.

– Replex Net Zero Daylight Harvesting System. Wilts explained that the system goes beyond the tube systems that have been around for at least a decade and funnel daylight deep into building interiors. This system adds to the mix with LED lighting powered by rooftop photovoltaic panels.

– Cross-laminated timer. Jurisdictions across Canada are starting to permit the construction of ever-higher buildings in wood. Wilts noted the six-storey Origine in Quebec City, as one example. He also showed the Mountain Equipment Co-op building in Vancouver, which recently won a 2015 Canadian Consulting Engineering Award.

– Automated Parking Garages. The cars are stacked and retrieved automatically, which halves the building space required for parking. Also because the car engines are not started until the car is delivered to the front door, there is no need to ventilate the garage, which saves on exhaust fan energy. Windmill has incorporated an automated parking garage in the Eddy condominium. The occupants can use their smart phones to call for their cars to be delivered to the front door.

Wilts also showed how building materials are being transformed into green building agents. BioMason bricks that are literally grown from microorganisms. This astonishing technology (bricks are used in 80% of the world’s buildings) use microorganisms that grow cement crystals. The bricks don’t require firing.

Paints are ePaints are evolving, such as Air Pure Paint that actual eats VOCs, and the water based Marine Armor that is waterproof, flame resistant, acid resistant and prevents rust.

Wilts also talked about general trends that are pushing sustainable design to a new level. For example, solar energies will reach “grid parity” i.e. be equal in price to traditional energy sources, by 2017 or 2020, he said.

His inspiring gallery of green products shows that even though the green building industry is becoming mainstream, we are probably only just at the brink of a sea change that will likely see building methods transformed in the decades to come. 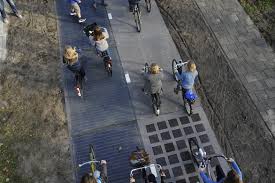