Who’s that fellow in the hard hat? A stereotypical engineer of course 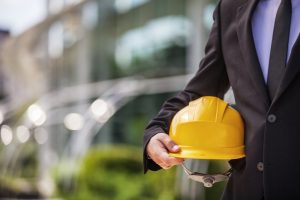 A U.K. organization known as the Sainsbury Management Fellows (SMF) has been monitoring how often hard hats are used to represent engineers in publications. The organization was founded in 1987 by Lord Sainsbury and awards scholarships to allow engineers to pursue MBAs and develop their business skills.

Since 2013, SMF has been conducting the Hard Hat Index, and the latest version, published July 7, shows that despite their efforts to discourage the stereotypical image, the headgear is being used more than ever to represent engineers.

“Despite leading figures in the engineering community and engineering students calling for the hard hat to be banned from promotional and educational material, it remains dominant, giving the wrong impression of the role of an engineer,” says SMF.

The survey monitored 17 engineering publications over 12 months. It found hard hats were used in 257 images, representing a 39% over the 2013 results.

Advertising, on the other hand, “presents a glimmer of hope.” The use of hard hats in advertising has ebbed and flowed over the four years, but this year there was a decline of 7% -this year. Advertisers used hard hats in 99 cases in 2016, compared to 107 last year.

The survey also found that there were some publications that had “shined” by not showing hard hats at all, “proving that it is possible to present engineering without defaulting to a hard hat.”

The president of SMF, David Falzani, takes the matter of how engineers represent themselves seriously: “The Hard Hat Index points out how the engineering community is choosing to represent itself in terms of image and emotional value. Generations Y and X are far more image and brand conscious than before. Image and emotional value are vital in our ability to attract, inspire, recruit and retain bright young people. This is a serious national challenge which we must all embrace.”

[Not mentioned in the SMF survey and commentary is the fact that safety laws require hard hats on building sites, so photography in that context is bound to comply.]

SMF also surveyed 70 engineering undergraduates in a workshop to find out their responses to engineering recruitment advertisements. They discovered that the vast majority of 30 advertisements were viewed negatively. The advertisements that did not rely on stereotypical images of engineers fared best, e.g. those by Dyson.