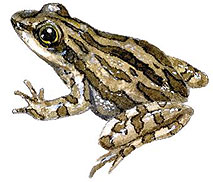 A fight over a frog erupted in June, after parts of a housing development on Montreal’s South Shore were stopped by the federal government.

The Quebec Environment Minister, David Heurtel, complained that the Canadian government was acting unilaterally and intruding on the province’s jurisdiction in protecting the Western Chorus Frog.

Catherine McKenna, Canada’s Minister of Environment and Climate Change determined in December that the frog “is facing an imminent threat to its recovery,” and said that by law she was required to recommend to the Governor in Council an emergency protection order for its species and habitat. In June she followed through, and issued an order under the Species at Risk Act. It affects the municipalities of La Prairie, Candiac and Saint-Philippe and will come into effect on July 17, 2016.

The developer of the Symbiocité development was to build 1,200 houses on land in La Prairie and has been told it cannot proceed with two of the six phases. The forbidden homes were to be built on a wooded wetland where the frog enjoys its watery world.

The frog, which grows to around 2.5 centimetres, has lost 60 per cent of its habitat in that area, and is not faring well in other areas of southwestern Quebec. It was only the second species to receive an emergency protection order since the Species at Risk Act was passed in 2002.

In an article in the Globe and Mail, a lawyer with the Quebec Environmental Law Centre, said  this was the first time that the Act had been used to block a real estate development. The previous federal government refused previous requests for a permanent protection order for the frog.

The Environment Minister’s June 23 statement said that the “primary purpose of the measure is to prevent the loss or degradation of the habitat the Western Chorus Frog needs to grow and reproduce.”

It continued: “This decision will not impede the development of the public and community infrastructure planned in La Prairie, such as the school or the arena. In addition, of the 1,200 housing units initially planned as part of the Symbiocité project, only 171 will not be built.”

To read an article in the Globe and Mail, click here.

To read the Ministry of Environment and Climate Change’s statement, click here.