On Sept. 25 and 26, CanBIM held a regional event at the Hyatt Regency Toronto, focusing on what is certain a timely theme for the Greater Toronto Area (GTA): addressing the affordable housing crisis through digital innovation and technology. 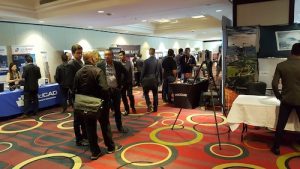 The mini-conference started with a morning tour of construction contractor PCL’s ‘agile’ facility in western Toronto, where a controlled factory environment enables the off-site, modular prefabrication of various project elements, which can then be shipped directly to jobsites. This process, combined with building information modelling (BIM) software, can improve the productivity, efficiency and quality of the construction process.

By way of example, PCL prefabricated 360 washrooms and 14 data rooms for Toronto’s new Humber River Hospital, which helped ensure the building was completed on schedule.

While BIM software is generally associated with such large-scale facilities, Toronto-based BIMstudio co-founders Jad Joulji and Joris Raaijmaakers explained on the event’s second day how it can also benefit the construction of low-rise, single-family dwellings. They have discovered this firsthand while working with Mattamy Homes, Canada’s largest residential builder.

“BIM shortens time to market, reduces change orders and increases the quantity of information available for the homebuyer, who is making a significant investment,” said Joulji. “A BIM hub can take all of the inputs—from land to plumbing to HVAC—and standardize the output.”

“The traditional construction process is sequential, ambiguous and reactive, with the various disciplines acting separately,” said Raaijmaakers. “The BIM process, on the other hand, is parallel, integrated, transparent and proactive.”

They started with a pilot project encompassing a community of 20 houses in four styles, before ramping up to larger-scale integration. Inspired by the manufacturing optimization efforts pioneered by the automotive industry, they built upon the geometry, data and codes in BIM with templates for graphics, filters and schedules. The more they were able to ‘swallow’ the aforementioned disciplines, the more they were able to repurpose their data to create trade-specific instructions, i.e. one document for an electrician and another for an HVAC installer.

“It comes down to return on investment (ROI),” Joulji said. “We saved 1,820 hours with a process that was 30% to 50% faster than traditional computer-aided design (CAD).”

Referring to the project’s ‘Ikea’ style, Joulji hinted at potential for lower costs for purchasers. And while Toronto’s housing affordability issues relate to that old real estate mantra—“location, location, location”—as it relates to the high cost of land itself, the CanBIM event certainly highlighted how building design, construction and even operation still use traditional workflows and are poised for significant disruption with today’s technology.

Examples from the other side of the planet were featured in a subsequent presentation by Scott Pittman, North American vice-president (VP) of Pinnacle Infotech, a BIM engineering firm based in India. Like PCL’s agile facility, Pinnacle considers prefabrication key to success in the construction industry, along with modularization.

“Prefabrication is already huge in the Middle East,” he said, displaying multimillion-dollar projects Pinnacle has worked on in Qatar, Saudi Arabia and Dubai, U.A.E. “It reduces costs, construction waste and work stoppages due to inclement weather, while improving jobsite safety and environmental performance. The biggest savings, though, come from being able to develop the jobsite at the same time as the building components are being put together.”

“This is not the right approach for every project out there, but it’s good for repetitious projects, those that are restricted by fast-tracked schedules or site constraints, those that require modularity and, on the other hand, those with unique forms,” he said. “We’ve prefabricated electrical generation and switchgear and water storage and pumping ‘pods.’”

And while Pinnacle specializes in hospitals, stadiums, museums and the like, Pittman also points to entire communities of residential housing that have benefitted from the efficiency of BIM. If Mattamy Homes’ experiment is anything to go by, perhaps the approach has a future in Canada, too.