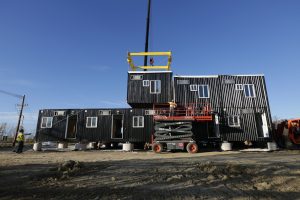 Modular construction will be the wave of the future according to Julian Bowron of Vectorbloc in a presentation at Construct Canada.

Speaking on December 1 at the Toronto event, Bowron said that modular construction offers a lot of advantages owing to the growing complexity of building techniques and the concurrent diminishing of  labour skills. Modular construction methods also allow much of the labour to be done in a protected indoor environment, which is better for the aging workforce, and for the materials. Factory assembly means better worker health and safety, and reduced waste.

President of a Toronto-based company that specializes in modular construction, Bowron pointed out that for decades modular construction has been seen as a good idea, but it has not taken off with a high degree of commercial success. He compared it to the ready adoption of standardized components by industries such as aviation and automobile manufacturing, and the advances they have made as a result. He agreed that the modular approach is not ideal for every building, and he cited some high-profile examples where things had gone wrong — a New York apartment building where the facades didn’t fit together, for example.

But he pointed out the many advantages that modular construction can have. In Singapore, for example, in an effort to reduce congestion and other impacts on the city, contractors are only allowed to bid on projects if a substantial amount of the construction is using modular elements that are prepared off site.

In North America in the construction of data centres, about 20% of the work is done as modular construction, with some projects consisting of 90% modular components, said Bowron. This is partly because these centres are so vast and homogenous, but also because the construction and systems are very detailed and require special skills.

The modules Bowron speaks of are not just structural systems. They incorporate built-in services such as HVAC and plumbing, along with cabinets and furniture sometimes. The modules can simply be fastened together, almost “plug and play.” He even described a project where workers had assembled a multi-storey worker housing development in a few hours, complete with furniture and bedding in the drawers.

True modular construction requires a highly precise and detailed level of design, he said, with a “cut-file quality output” that allows the installers to work with pre-measured parts such as the wiring. The designer has to begin by creating a “module map” taking into account the variants, and effects like seismic and wind loads.

Modular construction is not for every building, “nor for all parts of a building,” Bowron conceded, but it would be a solution to the current demand for housing.  A seniors building with repetitive stacked units lends itself to modular stacked construction, for example. But the modules can be combined with a podium building that is constructed conventionally and allows for a more complex floor plan, clear spans, high ceilings, etc. where common areas such as games room, chapel and dining hall can be located.

The assembly process can be a delicate operation. He showed an emergency workforce housing project in Ohio where the chassis that supports the modules was laid on footings fitted with adjustable plates. To align them precisely a laser line was used that was accurate enough to account for the curvature of the earth. The space between modules was very tight: 1/8 inch.

The biggest factors holding back the modular construction industry, Bowron said, is that manufacturers are failing to scale up their operations to meet owners’ needs, combined with a lack of standardization among different producers’ modules.