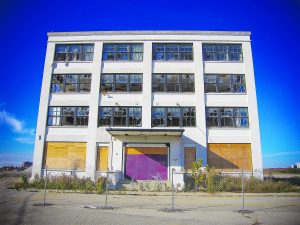 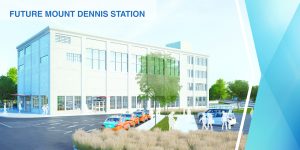 A 3,000-tonne building was moved 60 metres one morning last week to make space for the construction of an LRT station at the west end of Toronto’s Eglinton Crosstown line.

Moving the former Kodak Building to make way for the Mount Dennis LRT station at 3500 Eglinton Avenue West was done on August 24 over a space of around two hours. The travelling speed was around 8 inches per minute. Counting the steel reinforcement that was added for the removal purposes, the building weighs 3,000 tonnes, has four storeys and amounts to around 11,000 square feet.

The building was constructed in 1939 and served as a recreational centre for Kodak’s employees. It once even incorporated a cinema. It has become such an iconic building to the west Toronto community that Metrolinx, the transit authority building the new LRT, is going to preserve it, move it back, and incorporate it into the new Mount Dennis Station.

Mount Dennis is one of the 15 stations that are on the 10-kilometre underground section of the line. Metrolinx says that all the underground stations will be under construction before the end of the year.

In total the line stretches 19 kilometres east-west mid-town, and will have 25 stations. It is due to be completed by 2021. The project — trackwork, stations, signalling and other infrastructure —  is being designed by SNC-Lavalin as a partner in the Crosslinx consortium. The consortium’s other members are EllisDon, AECON and ACS Infrastructure.

Now the building is moved the building foundation is being re-excavated for its new purpose, while a maintenance and storage facility for the LRT is being built on a separate adjacent site. Mount Dennis station will be a transport hub, with direct access to the UP Express train to the airport, to the Kitchener GO commuter line, and to the TTC subway network.