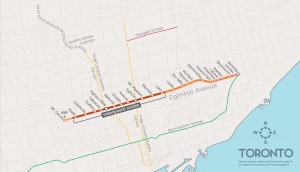 Just before two tunnel boring machines were due to set off cutting the eastern underground section of the Eglinton Crosstown LRT in Toronto, Metrolinx chairman Bruce McCuaig announced that the project would be delayed by a year.

A consortium known as Crosslinx Transit Solutions led by SNC-Lavalin was chosen to build the 19-kilometre east-west line in April. The project was originally scheduled to open in 2020, but Metrolinx now says it will be 2021.

In a statement, Metrolinx said the change of date was “to enhance the bid documents.” However, there had already been concerns about the disruptions that the construction would cause to traffic along the busy artery, which runs through residential and commercial areas in the heart of Toronto.

In an article in the Toronto Star, the estimated cost of the project is $4 billion. It is the largest transit expansion in the history of Toronto

The line includes 10 kilometres of underground track in the centre portion, and 25 stations and stops.

The tunnel boring machines “Don” and “Humber” began their journey on September 29 from near Leaside Avenue and will travel west to Yonge Street at the centre of the line. Another two TBMs are already travelling east from Keele Street. The total above-ground and tunneled line stretches from Mount Dennis in the west to Kennedy in Scarborough.

To read the article in the Toronto Star, click here

To view the comprehensive 2010 Environmental Report on the project, click here.