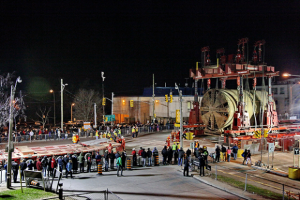 TBM is moved for the Crosstown LRT along Eglinton Avenue in Toronto in April 2015. Photo: Metrolinx.

Two major contracts have been awarded to engineering companies for Toronto transit projects this month.

On June 9 Metrolinx announced that it had awarded the project to design, finance, construct and maintain the Eglinton Crosstown LRT project to Crosslinx Transit Solutions Consortium. The group consists of SNC-Lavalin, ACES Infrastructure, EllisDon and Aecon. This is Toronto’s first east-west transit rail line since the TTC’s Bloor-Danforth subway line (now Line 2) was constructed to the south in 1966. The Eglinton Crosstown line will run underground for 10 km from Mount Dennis in the west to just east of Brentcliffe Road in the east. It then rises to the surface to continue another 9 km, ending at Kennedy Station in Scarborough. Tunnelling is under way already.

On June 11 the TTC awarded a 10-year contract to WSP / Parsons Brinckerhoff for the Systems Design and Management Services of the Scarborough Subway Extension. The This line will replace the aging Scarborough Rapid Transit line. People from WSP │ Parsons Brinckerhoff will be integrated in the SSE Project Management Division for project strategies and planning, and will have specific responsibility for the design and delivery of the systems. The systems include track, power, communications, SCADA and signals.

Quantum Murray, an environmental and industrial services company based i Toronto, is to carry out a large-scale decommissioning project at the Ford St. Thomas Assembly Plant outside London, Ontario. The work involves removing both the plant and ancillary buildings. The plant manufactured vehicles between 1967 and closed its doors in 2011. Quantum Murray has had a longstanding relationship with the Ford Motor Company, having done projects at its Oakville and St. Thomas facilities. Decommissioning work on the London property starts in late July and will take 12 months.

CH2M has been named winner of the 2015 Stockholm Industry Water Award. The award is for developing and advancing methods to clean water, and for increasing public acceptance of recycled water. The award was established in 2000 by the Royal Swedish Academy of Engineering Sciences and the World Business Council for Sustainable Development, and is supported by the International Water Association and World Wide Fund for Nature (WWF).

WSP held an Analyst and Investor Day in New York City on June 10. The event provides an overview of the Montreal-based company’s U.S. business segments and its growth strategy for the country.