Construction of the bridge began in May 2013, with PCL Constructors Westcoast as the general contractor and MMM Group (WSP) providing the engineering services for design and project management. 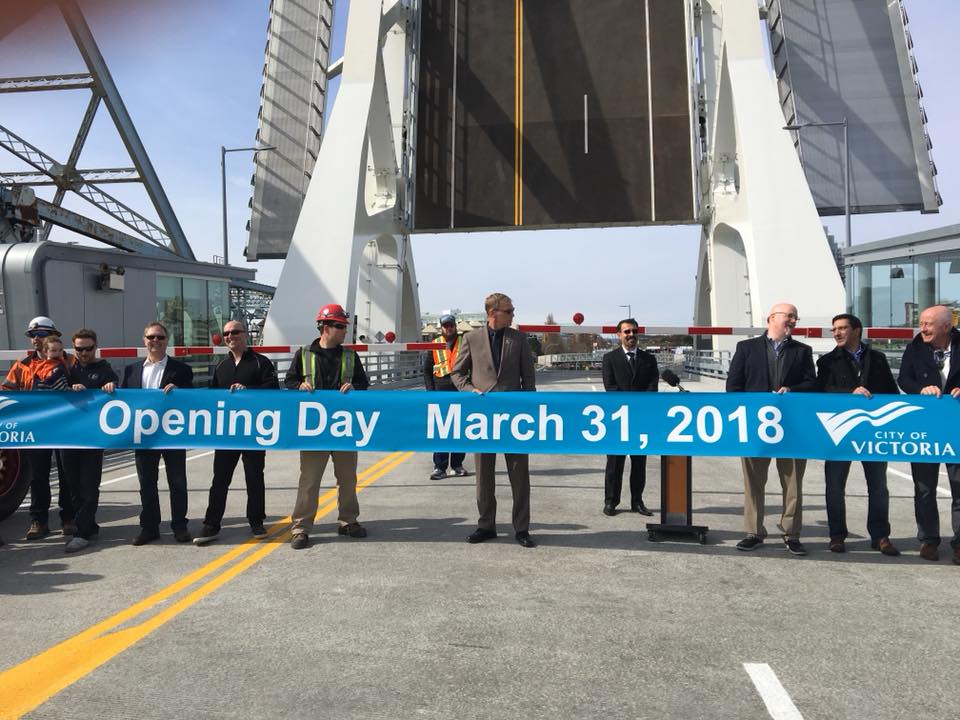 The City of Victoria opened the new Johnson Street bridge to traffic on Saturday, March 31, following an official opening and community celebration event.

At 46 metres, the new bridge is the largest single-leaf bascule lift bridge in Canada – and one of the largest in the world – creating a new landmark in city’s harbour.

Construction of the new bridge began in May 2013. PCL Constructors Westcoast was the general contractor and the City retained MMM Group (WSP) to provide the engineering services for design and project management.

A 2009 assessment of the old Johnson Street Bridge identified issues common to bridges built in the 1920s: extensive corrosion to steel structural beams, and obsolete mechanical and electrical systems, as well as significant seismic vulnerability. It was determined that a substantial investment in the bridge would be required to avoid further deterioration, increasing operational costs, and possible closure.

In November 2010, a referendum was held and citizens approved the City of Victoria borrowing of up to $49.2 million towards the replacement of the bridge.

PCL’s fixed-price contract with the City was for $62.9 million. The overall budget for the replacement is $96.8 million, with additional costs including project management and engineering design, insurance, permitting, as well as legal, communications, and administrative support.

With approximately 30,000 crossings each day, including vehicles, local transit, pedestrians and cyclists, the Johnson Street Bridge is one of the busiest and most important transportation links to Victoria’s downtown.

Located over a federal waterway, the new bascule lift bridge will also serve the marine industry, commercial vessels and recreational marine users by providing access through the marine channel below.

While traffic will now be moving across the new span, work continues for the next several months to complete the project.  Work will now shift to remove the old bridge span and complete the interim treatments for public spaces at both the east and west approaches to the bridge, public plazas and a new waterfront park in Victoria West.

The new bridge is built to serve the community for the next 100 years and provides improved safety and accessibility. There are three travel lanes for vehicles, on-road bike lanes, and a multi-use trail for pedestrians and cyclists.

A pedestrian bridge spanning Esquimalt Road that connects the Galloping Goose and E&N trails is also open for public use. A dedicated pedestrian pathway on the south side of the bridge, with viewing access into the bascule pier, will open later this summer following the removal of the old bridge.

Pending the completion of the southern pedestrian walkway, more than 50% of the new bridge deck space will accommodate pedestrians and cyclists.