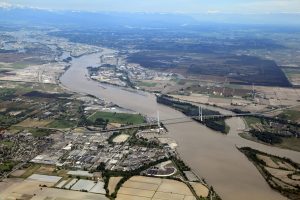 Proposed bridge to replace the Massey Tunnel between Delta and Richmond, B.C. Photo: BC Ministry of Transportation

The British Columbia Ministry of Transportation and Infrastructure has submitted its application for an environmental certificate to construct the George Massey Tunnel Replacement Project.

The project is to build a bridge to replace the 630-metre tunnel that runs below the South Fraser River about 20 kilometres south of the city of Vancouver. A key artery in the region that connects Richmond and Delta along Highway 99, the four-lane tunnel causes notorious traffic snarls, which result to an estimated one million hours of vehicle idling each year.

The tunnel was completed in 1959 and only has about 10 years’ of useful life left before its electrical and mechanical systems need replacing, not to mention that it cannot be structurally changed to meet the higher new seismic standards. The structure lies about 20 metres below sea level at its lowest point and is the deepest tunnel in Canada.

Plans are to replace the tunnel with a bridge and 50 kilometres of new transit and HOV lanes between Highway 91 in Delta and Bridgeport Road in Richmond. About 10,000 transit passengers who use the tunnel now will benefit from the new bridge’s dedicated transit lanes and the project includes $40 million for cyclist and pedestrian infrastructure.

The plans were submitted on July 26 to the Provincial Environmental Assessment Office, initiating an application period of 180 days. The plans are open for public comment on line and at three public open houses until October 3.

MMM Group (now WSP) is engineer for the B.C. Government on the $500-million project. Sun Coast Consulting are the technical advisors; Hemmera EnviroChem are the environmental advisors, and Lucent Strategies are doing community relations.

The B.C. Environmental Assessment office is also seeking advice about the project from a technical working group that consists of a host of provincial and federal government ministries and agencies.

From an environmental point of view, the new project promises to reduce greenhouse gas emissions by 70% from the current situation, or 13,000 tonnes per year. The bridge is to be designed to account for rising sea levels as a result of climate change, and there are to be no bridge piers in the Fraser River. Other environmental considerations included in the plans are that the construction will result in no net loss of land available for agriculture, and that the work on Deas Island, which is on the bridge’s route, will be done on the Ministry of Transportation’s right-of-way. Biofiltration marshes will be provided for managing stormwater and to create new animal habitat, Green Slough will be restored to its historic alignment, and the portions of Deas Island Regional Park that are currently separated by the tunnel and Highway 99 will be reunited.

The scheduled date for construction is 2017.