Massey Tunnel replacement to be biggest bridge in B.C. 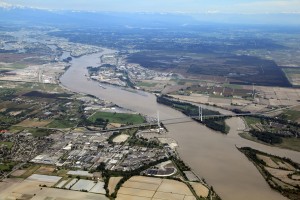 Proposed bridge to replace Massey Tunnel between Richmond and Delta, B.C. Image: BC Ministry of Transportation and Infrastructure.

The B.C. Ministry of Transportation has begun the third phase of public consultations for a new bridge to replace the Massey Tunnel, a vital artery that links Richmond and Delta, two communities southwest of Vancouver.
Measuring 3.3 kilometres long and crossing the south arm of the Fraser River, it will be the “largest bridge ever built in B.C.” according to B.C. Transportation and Infrastructure Minister Todd Stone. It will be a cable stayed structure, similar to the Alex Fraser Bridge upstream.

The existing tunnel, part of Highway 99, was opened by Queen Elizabeth II in 1959 as the Deas Island Tunnel. It now carries 80,000 vehicles and 10,000 transit passengers every day. The 630-metre structure is a divided tube, consisting of six precast sections that were floated into place in a trench dug into the river bed, then covered over. At its lowest point it is 22 metres below sea level, the lowest roadway in North America.

Today the tunnel carries the distinction of being B.C.’s biggest traffic bottleneck, with long line-ups only expected to get worse as populations increase in the region. Besides not being designed to current seismic standards, its systems have just 10 years’ left of service life, including its lighting, ventilation and pumping systems.

Since the government decided to replace the tunnel with a bridge in September 2013, the Ministry of Transportation has been doing studies. These include traffic, technical, geotechnical studies, as well as financial analyses and consultations with First Nations. The result is a Project Definition Report which is now posted at www.masseytunnel.ca and open for public comment until January 28.

Once the public feedback has been taken into account, the Ministry says the project will be submitted for an environmental review. Construction is slated to begin in 2017.

The concept shows a cable-stayed bridge with a 660-metre clear centre span between two towers, 200-metres high, on each side of the river. The bridge will have a navigation clearance of 57-metres and will include provision for a future transit line. It is designed to withstand a 1-in-2475-year seismic event and to have 100 year service life.

The project includes new interchanges at Highway 17A, Steveston Highway and Westminister Highway. Also 24 kilometres of Highway 99 will be widened, from Highway 91 in Delta to Bridgeport Road in Richmond. There will be direct access to the Canada Line transit at Bridgeport Station.

The decision to replace the tunnel with a bridge rather than another tunnel was made for several reasons. The public expressed preference for driving in the open air rather than in an enclosed tunnel environment. But also, the Ministry says that to build a tunnel to the seismic safety standards of today, would have carried “significant cost and risk.” To build an “immersed tube” tunnel similar to the existing Massey Tunnel, for example, would mean reinforcing the entire length of the tunnel with underwater stone columns, sand, gravel and riprap, including reinforcing along the sides and bottom of the river. A bored tunnel would also have had its challenges given the loose sands and clays of the area, says the Ministry.

Emergency responders had been very clear about their preference for a bridge over a tunnel. Also, by building the bridge over top of the existing tunnel, the project should have minimal disturbance in the Fraser River.

The new bridge will have 10 lanes in total. There will be four lanes in each direction, plus a dedicated transit/HOV lane in each direction. There is also a multi-use pathway for cyclists and pedestrians. Currently they have to wait at each end of the tunnel and be shuttled through by van.

It’s said that the new tunnel will reduce some commute times by half, although there will still be other bottlenecks leading into Vancouver itself. With wider lanes, the new bridge is also expected to have 35% fewer collisions.