Historic road to Canada’s Arctic coast gets under way

Last week Prime Minister Stephen Harper was in the Far North for the official groundbreaking of the first permanent highway to reach Canada's Arctic coast. 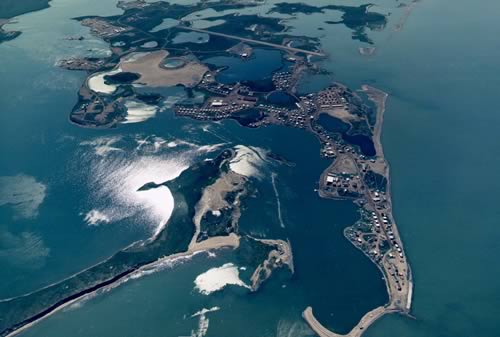 Aerial view of Tuktoyaktuk in the Mackenzie River Delta, off the Beaufort Sea. Photograph: Govt. of Northwest Territories.

Last week Prime Minister Stephen Harper was in the Far North for the official groundbreaking of the first permanent highway to reach Canada’s Arctic coast.

The all-season highway stretches from the Dempster Highway (NWT Highway 8) at the town of Inuvik just above the Arctic Circle, northeast to the hamlet of Tuktoyaktuk on the shore of the Arctic Ocean near the Mackenzie River Delta.

Envisioned since the 1950s, the highway’s reach to Tuktoyaktut will ease access to oil and gas exploration operations in the Beaufort Sea. Prime Minister announced an intention to complete the 138-km extension during his election campaign of 2011, and at the groundbreaking on January 9, he recalled its historic and strategic importance. “I am tremendously proud that our Government’s investment in this job creating, all-season Inuvik to Tuktoyaktuk highway will, for the first time by road, connect and unify Canada from sea to sea to sea. This historic project realizes the visionary initiative of Canadian Prime Minister John Diefenbaker back in the 1960’s. Prime Minister Diefenbaker knew then what our Government is undertaking today: constructing a highway will improve the lives of people living in the North for generations to come, facilitating economic development creating jobs and enabling cost-effective, safe and reliable transportation of goods to and from Northern communities.”

Besides the economic benefits, the road will help establish Canada’s sovereignty over the Western Arctic region. Building the all-weather route will also guard against the possible warming damage that climate change could inflict on traditional ice roads. The federal government is providing $200 million of the $300-million cost of construction.

Approximately 70 kilometres of the road is on Inuvialuit private lands maintained by the Inuvialuit administration.

Tuktoyaktuk, located on Kugmalit Bay, has been used by the Inuvialuit people for centuries for catching caribou and beluga whales, as well as acting as a jump-off transportation base for the area. It has a population of around 900 and is currently only accessible by temporary ice road, barge or air. The settlement is surrounded by the small hills known as pingos, which rise out of the otherwise flat horizon.

Inuvik, which is currently the terminus of the Dempster Highway, has a population of 3,500 and is the administrative centre of the Inuvik Region. It is known for its igloo-shaped church, the Lady of Victory, as well as being North America’s most northern mosque.

On January 10, EGT-Northwind, a joint venture of two local companies E. Gruben Transport and Northwind Industries, was given the $229-million contract to engineer the highway for the NWT Department of Transportation. In order to protect the permafrost, cut and fill techniques cannot be used because they could result in thawing the ground. Instead the two-lane gravel roadway will be built-up on top of a geotextile fabric. Construction will take place primarily in the winter months also to protect the permafrost and work is expected to be completed by 2018. The road will be 8 to 9 metres wide with 3:1 side slopes. Single lane bridges are being constructed at some stream crossings and culverts will be used at others.

Another, longer stretch of all-weather highway that would run northwest from Wrigley to Dempster and Inuvik along the Mackenzie Valley is currently undergoing an environmental assessment.

To see a map of the highways, click here.