Canadian engineers are top winners in New York and Athens

The prowess of Canadian consulting engineers was much in evidence this spring, with two Canadian teams winning top international awards for their projects.

On May 6, a project by a team from CH2M in Canada won as Water Project of the Year at the 2015 Global Water Awards, presented in Athens, Greece. The Lakeview Water Treatment Plant, located in Mississauga, Ontario won the award for its phase 2 expansion which was completed in fall 2014.

Meanwhile, at the end of March, Entuitive, a structural engineering firm based in Toronto, won a prestigious Diamond Award in Structural Systems at the ACEC New York awards of excellence. Entuitive won for their work on the Manhattan West Penn Station Rail Corridor Overbuild Platform.” The project involved designing an innovative structure to span over the railway tracks on North America’s busiest railway corridor, reclaiming an area of 2.6 acres of land.

CH2M arranged the permits and designed and commissioned the plant, which is one of the largest of its type. It has a reduced footprint that allows green space to be preserved and its processes allow 95% of the process residuals to be returned to Lake Ontario rather than needing to be disposed of by truck.

Brookfield Properties hired Entuitive to design the foundations and platform support beams, and to design the structural design of the long span platform. It spans 250 metres, incorporating deep post-tensioned segmental precast box girders. The solution enabled the construction crews to avoid disrupting service for Amtrak and the Long Island Railway. The project also required constant coordination with the design of Amtrak’s new high-speed rail terminal at Moynihan Station, directly east of the site.

Lead engineers on the project with Entuitive were Barry Charnish, principal, and Mike Hillcoat, associate. Both attended the ceremony on March 28 in New York. 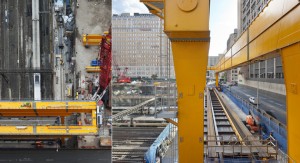