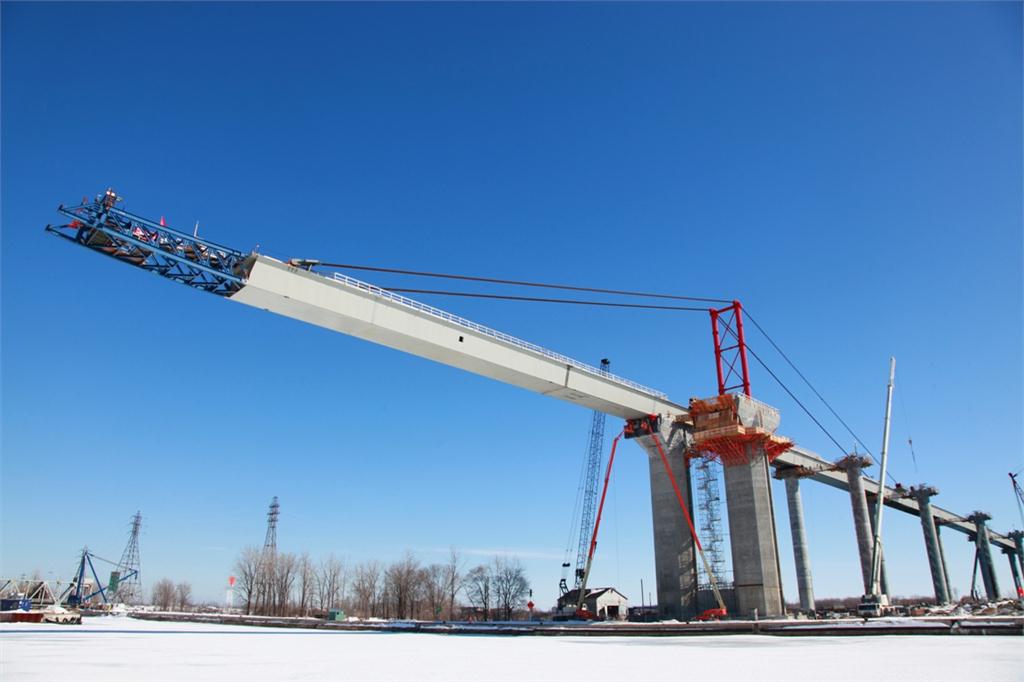 The Beauharnois Canal Bridge, part of the last leg of Autoroute 30, opened to the public on December 15, completing a massive highway project that started construction in 2009 but has its genesis in the 1960s. This final section of Autoroute 30 runs from Vaudreuil-Dorion to Chateauguay, bypassing Montreal via the south and providing a corridor to the Montérégie region. It is a four-lane highway that has cost a total of $1.5 billion.

Lead engineering designer for the bridge and the entire 42-kilometre highway is Arup.

The $750-million Beauharnois Canal Bridge is a critical component and one of two major crossings along the tolled highway. The Beauharnois Canal bridge spans over the St. Lawrence Seaway, the main shipping route between the Atlantic Ocean and the Great Lakes. The bridge is a 2.5 kilometre-long structure with a gradient of 3.5% that provides the necessary 38.5 metres of clearance above the shipping canal in the Seaway.

The bridge’s eastern approach superstructure, including the navigation span, is a continuous steel-concrete composite box girder superstructure stretching 1,446 metres. As of today, the bridge is the second longest incrementally launched bridge in the world, with a total launched length of 1,446 metres, a figure only exceeded by the Millau Viaduct in France. The western approach has a total length of 1,095 metres, with intermediate expansion joints. Constructed with 2-metre deep NEBT beams, the 45-metre spans are among the longest ever achieved in pre-stressed bridge construction in North America.

Within the canal, the footprint of the bridge had to be minimized, both to limit the loss of fish habitat and also to minimize any head-loss in the river flow that might affect a hydro-electricity dam downstream. To achieve this, the bridge in this section has 82-metre spans with pile caps that lie above the water level.

Rather than relying on the Canadian Highway Bridge Design Code’s more conservative approach, Arup analyzed the soil conditions in a seismic response model at each of the bridge’s foundations. The specific soil properties varied significantly along the length of the bridge, so this method resulted in a more accurate and efficient design, yieldiog significant cost reductions..

Arup is the designer to S.E.N.C. Nouvelle-Autoroute-30, the public-private consortium that has a 35-year contract to design, build, operate, finance and maintain the entire highway and its structures. The international consortium includes Dragados Canada, Acciona Infrastructures Canada, Aecon and Verreault.