Airships being developed for remote transportation 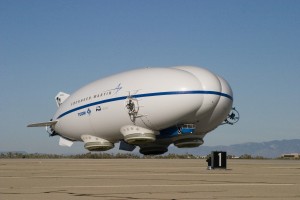 There was a lot of hot air floating above Alberta on April 1 when the Alberta government announced it had launched a tendering process to acquire a fleet of 200 giant airships to transport oil to the Asia-Pacific region.

The press release said the zeppelins would enable the province to export its oil to international markets “without the involvement of the National Energy Board, or difficult negotiations with other provinces.” The premier’s office later admitted the statement was an April Fools’ joke.

Yet in reality these days airships are being linked to the oil sands and other remote mining sites. Manufacturers like Lockheed Martin are developing a new breed of airship, also known as Lighter Than Air (LTA) vehicles, which are designed to transport heavy equipment to remote sites.

On March 30 the U.S. aerospace company announced that a U.K. company, Straightline Aviation, had signed a letter of intent to buy 12 of its airships. Straightline is paying an estimated $480 million for the vessels, which it expects to deploy in Canada’s north, as well as other places.

If the use of airships for remote transportation purposes catches on, it might not be good news for consulting engineers, since the airships don’t require much infrastructure on the ground to land.  Mining and resource companies would not need to build roads or airports to bring in their heavy equipment and materials.

Airships have come a long way since the Hindenberg blew up in 1937. The Airship Association lists 18 companies on its that are developing different types, including remote piloted vehicles. They include companies from France, the U.K., Germany, Russia and China.

The Lockheed Martin LMH1 hybrid airship was developed according to criteria approved by the Federal Aviation Administration in 2013. The vehicle is filled mostly with helium and has landing pads that function like hovercrafts, enabling it to land on any flat surface, including ice and water. The ship could carry 20 tons of cargo, but can also be scaled up to be much larger and carry loads as heavy as 500 tons. As for speeds, it can cruise at around 60 knots, has a range of 1,400 nautical miles, and a fuel capacity of 5,000 gallons.

Airships have environmental advantages: they are quiet, they are more fuel-efficient than traditional aircraft.