Ten years ago, the South Red Deer Regional Wastewater Commission (the organization that oversees wastewater management for communities in Central Alberta including Mountain View County, the Town of Bowden, the Town of Penhold, Red Deer County, the Town of Innisfail and the Town of Olds) together with Stantec began designing a system that would impact the region for years to come.

The sheer length of the new system, the longest regional wastewater network in the province, posed an engineering design challenge, plus the construction occurred within a highly populated corridor, while crossing several environmentally-sensitive areas.

The system plan featured forcemains constructed with corrosion proof fused high-density polyethylene (HDPE), creating a jointless pipe. In the design, a hydraulic model of the system was used to optimize the pump and piping sizes. The analysis determined that the pipe sizes range from 550 mm outer diameter on the Olds to Innisfail leg, up to 850 mm outer diameter on the Penhold to Red Deer section. Throughout the system, the pipe pressure ratings range from 126 PSI to 202 PSI, depending on location and the topography of the area.

The size and weight of the pipe posed an implementation challenge. For efficiency, safety and quality control, fusing of the pipe occurred above ground in a controlled environment prior to the fused pipe strings being installed. Some of the fused strings were up to 800 meters in length, weighing up to 93,440 kg.

Overall, the topography from the Town of Olds to the City of Red Deer is downhill, dropping 168 meters over the 90 km. Therefore, pressure sustaining valves (PSV) were strategically placed along the alignment to make sure the pipeline stays full when the lift stations are not pumping.

This step improves the operation of the system by eliminating air pockets and vacuum conditions that would otherwise occur from a partially full pipe and reduces the amount of air/odour released. The PSVs are located at three lift stations (Bowden, Innisfail and Penhold) and at the newly designed odour management facility constructed in Red Deer, just before the forcemain releases the wastewater to atmospheric pressure.

Due to the length of the system, the long retention time of the wastewater creates a high potential for odour generation and gases—specifically hydrogen sulfide (H2S)—to be released wherever the system vents to the atmosphere. The odour management facility in Red Deer was designed to address these concerns. The facility includes treatment for both vapour and liquid phase odours. In addition, each of the four lift stations over the course of the system features a tower biofilter and chemical injection system to control vapour and liquid phase odours until the wastewater ultimately reaches the Red Deer facility. 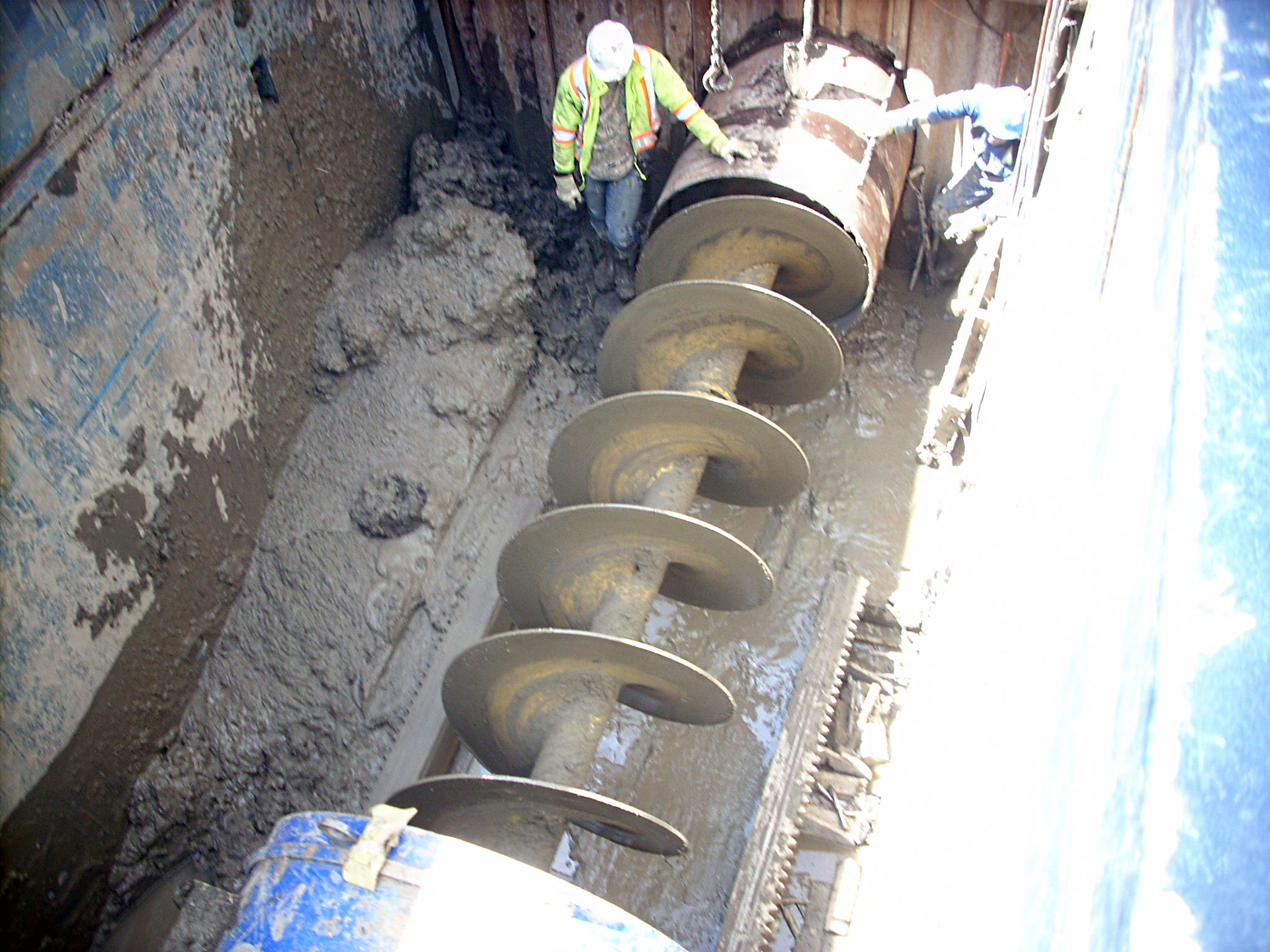 Once the optimal alignment was determined, a geotechnical investigation was completed to evaluate soil conditions and avoid areas where soils were less suitable for construction, reducing the risk of lengthy drills, borehole instability and refusal when installing the pipe via horizontal directional drilling (HDD).

Trenchless design was used (cased bores and HDD) for over 10,000 meters of pipe. In some instances, the drill path was lowered under wetlands or creeks to ensure more cover over the pipe, reducing the potential risk in environmentally sensitive areas. Approximately 120 wetlands, 10 creeks and one river were crossed during construction.

The pipeline also had to cross Highway 2—the main connector between Calgary and Edmonton and the busiest stretch of highway in Alberta. Case boring was used to ensure no settlement occurred while drilling the pipe under the corridor. The alignment also had four railway crossings.

Directing regional wastewater to one centralized facility in Red Deer meant extensive upgrades were required to that plant, which was already operating close to its capacity. Ultimately the upgrades increased the capacity of the wastewater treatment plant from 47.5 MLD to 72 MLD, and will service a population of over 150,000 people.

The upgrades also increased level of treatment of the effluent, using biological nutrient removal and UV disinfection, before releasing it into the Red Deer River. This increased treatment reduces biological oxygen demand and total suspended solids by 20%, and reduces the ammonia and phosphorus concentrations being discharged.

As part of the upgrades to the plant, a cogeneration system was also installed on the digesters. This allows the plant’s electrical demands to be largely offset by power generated from biogas of the wastewater. Additionally, heat from the electricity generation is used to heat the digesters

In addition, three siphons were installed under the Red Deer River, each 322 meters long HDD’s, providing longterm capacity for the SRDRWS flows and future growth for the City of Red Deer.

During design, it was determined an up-to-date operation system was needed. With input from the Commission’s operators, Stantec designed the web-based Supervisory Control and Data Acquisition Records and Reporting (SCADARR) system allowing operators to maintain new and existing transmissions lines through one platform.

Because the system has numerous stakeholders requiring access to the operational data, but a single party responsible for operations, a dashboard and records information are accessible for all users on a password-protected basis, but control of system operations is limited to Commission operators.

The full SRDRWS went online in the summer of 2015, and will supply the region with a reliable wastewater system for the next 25 years. Three of the communities had the additional benefit of decommissioning their existing wastewater treatment plants, resulting in reduced operational and maintenance costs. The SRDRWS directly protects approximately 65 km of the Red Deer River, plus an additional 54 km of the Little Red Deer River, from receiving effluent discharges from those aging wastewater treatment systems.

Removal of those systems also improved the raw water quality at the intakes of the Anthony Henday and City of Red Deer water treatment plants, reducing the level of treatment and cost to produce clean water. These plants supply approximately 160,000 people with potable water throughout a 150 km reach of Central Alberta.

The $140 million SRDRWS project, constructed over eight years, had numerous complexities to overcome and will now be used as a model for the north and west legs of the Central Alberta Regional Wastewater System. Importantly, the system ultimately helps to protect valuable natural resources, while supporting growth in the region for years to come.

Stephan Weninger, P.Eng., is a principal with Stantec and leads water and wastewater projects in central and northern Alberta.