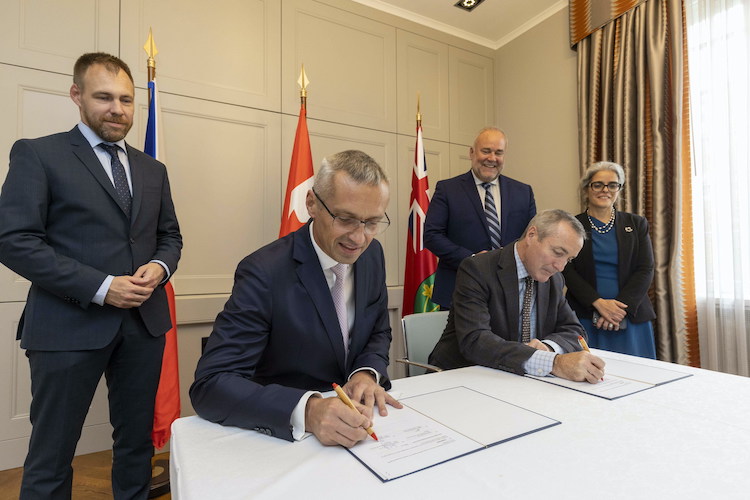 On Oct. 11, Ontario Power Generation (OPG) signed a memorandum of understanding (MoU) with the Czech Republic’s ČEZ to collaborate on advancing deployment of SMRs in their respective jurisdictions. Photo courtesy OPG.

With federal net-zero targets calling for deeper decarbonization of the power grid, momentum is building across Canada to increase capacity for emissions-free nuclear energy production. In addition to refurbishing existing facilities, which currently account for up to 15% of Canada’s (and about 60% of Ontario’s) generated electricity, another area seeing significant interest is the development of small modular reactors (SMRs), which could largely replace fossil fuel-powered generators for heavy industry, the oil and gas sector, communities and remote areas not connected to the main grid.

According to the Canadian Standards Association (CSA) Group, “more than 50 vendors in Canada and abroad are currently developing SMRS, leveraging proven nuclear power plant technologies, such as light water reactors, or introducing novel approaches.” The appeal of these new nuclear fission reactors includes their simplified approach to safety, small size, portability and scalability.

Compared to the 6,400-MW capacity of the Bruce Nuclear Generating Station’s eight Canada Deuterium Uranium (CANDU) pressurized heavy-water reactors in Tiverton, Ont., for example, a single SMR would produce between 5 and 300 MW.

Another goal is to improve affordability through factory-based plant construction. For this reason, groups of SMRs are already referred to as ‘fleets.’

“There’s a lot of momentum now,” says Amy Gottschling, vice-president (VP) of science, technology and commercial oversight for Atomic Energy of Canada Ltd. (AECL), which owns the Chalk River Laboratories and the intellectual property (IP) for the CANDU reactors. “Following the direction of Natural Resources Canada (NRCan) and the Small Modular Reactor Action Plan, with a pan-Canadian approach, we are supporting research, technology demonstrations, standards, programs, infrastructure developments and materials sciences through CNL. We are technology-agnostic.”

“OPG, for example, understands the need for both large and small-scale projects,” she says. 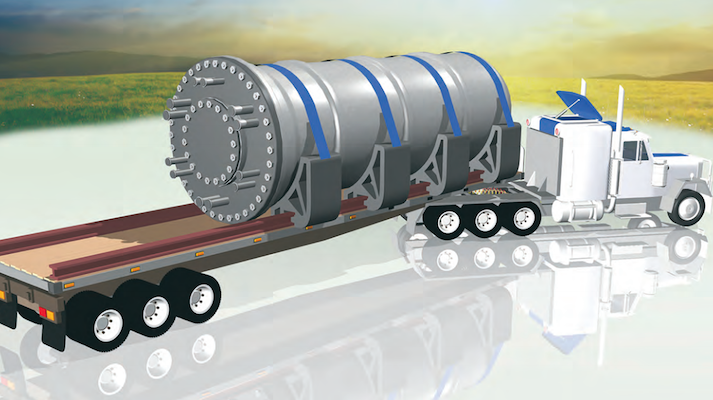 For its part, AECL is working with vendors to help build the needed supply chains, corresponding to various provinces’ degree of demand. Earlier this year, the governments of Alberta, Saskatchewan, Ontario and New Brunswick jointly released a strategic plan for SMR development and deployment, building upon a 2021 feasibility study from their respective utilities.

There is also interest from Manitoba, particularly in the local government district of Pinawa, which hosts the AECL-owned and CNL-managed Whiteshell Laboratories nuclear research and development (R&D) site. Connected to Manitoba Hydro’s grid, this site has been the 1,500-person municipality’s main employer—indeed, Pinawa was built specifically for its employees—but is now being decommissioned. So, there is an opportunity for a comprehensive SMR demonstration, which could lead to further deployments for off-grid communities and mining sites.

“This is what we call the middle stream, decarbonizing mining, oil, gas and other industrial operations in remote locations,” says Gottschling.

With the development of SMRs comes the need for new standards. CSA started its nuclear program in the 1970s and has since developed more than 65 standards to support safe and reliable operations. The Canadian Nuclear Safety Commission (CNSC) references 90% of these, which address the full life cycle of nuclear power plants and related facilities, from design to decommissioning.

In 2015, CSA established a task force to track the development of SMRs and their needs for standardization.

Following up on this task force’s initial work, CSA published a research report in 2021, exploring the role of standards in facilitating SMR deployment.

“The report outlines various approaches, analyzes case studies from the aerospace and electric vehicle (EV) industries and includes a landscape scan of relevant co-operation and harmonization initiatives for SMRs, including those among regulators, industry and standards development organizations,” says Logan. “It concludes with recommendations and considerations on standards harmonization. Some of the solutions proposed include updates to existing standards, developing new national, regional and international standards and collaboration with other jurisdictions.” 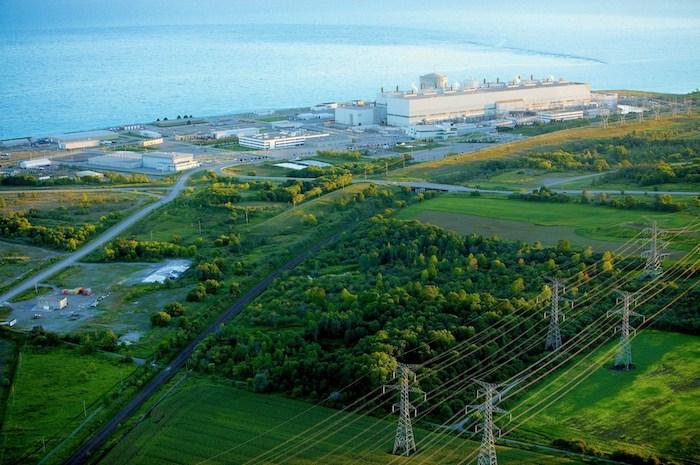 Echoing AECL’s technology-agnostic approach, CSA has adapted most of its nuclear standards over the past decade to incorporate technology-neutral requirements and guidance, so as to allow for new designs, including SMRs.

Examples include CSA N286-12, Management system requirements for nuclear facilities; CSA N290.7:21, Cyber security for nuclear facilities (which was developed with input from SMR representatives, among other stakeholders, right from its initial publication in 2014); CSA N293S1:21, Supplement No. 1 to CSA N293-12, Fire protection for nuclear power plants, developed in 2020 to clarify application to SMRs; and CSA N294-19, Decommissioning of facilities containing nuclear substances.

“It is also recognized SMRs use new technologies and enhanced safety features that may not be addressed within the existing standards,” says Logan. “For this reason, the task force has worked to identify and prioritize other standards-related topics that would impact SMRs, including pressure boundary, steel-concrete composite construction, functional containment, emergency management and planning zones, in-service and periodic inspection, reliability and integrity management. For these topics, we are working with stakeholders to evaluate the applicability of existing standards, develop a more specific list of gaps and recommend the scope and urgency of potential updates to the impacted standards.”

Interest in SMR deployment across multiple jurisdictions, she explains, is also driving CSA to engage and collaborate with both Canadian and international stakeholders to harmonize requirements. OPG, by way of example, recently signed a memorandum of understanding (MoU) with ČEZ Group in the Czech Republic-based to advance deployment of SMRs. Under the MoU, they will share information to help reduce financial, technical and schedule risk to both parties for future projects.

The need for nuclear-certified consulting engineering firms to take part in these ongoing developments is significant.

“CNL’s strategic vision for 2030, including but not just focusing on SMRs, needs strong partnerships to move fast, spanning government, academia and private industry,” Gottschling says. “We have Canada’s largest research campus and now is the opportunity for engineering companies to come forward.”

One such firm is SNC-Lavalin, steward of the CANDU design, originally developed more than 60 years ago and currently used across four continents. In the nuclear sector, SNC-Lavalin has overseen licensing, design, technology development, new builds, reactor life extensions, decommissioning and site remediation.

“I’ve been in nuclear for my entire career of more than 20 years and these are exciting times right now,” says Julianne den Decker, senior VP (SVP) of nuclear project delivery for SNC-Lavalin, who joined Areva after studying civil engineering and architecture, then worked for CB&I and Aecon Group. “Climate change and energy security concerns will push an increase in electricity generation. The promise of SMRs bakes in efficiency, modularization and repeatability through the ‘fleet’ approach and project management will be very important in controlling costs.” 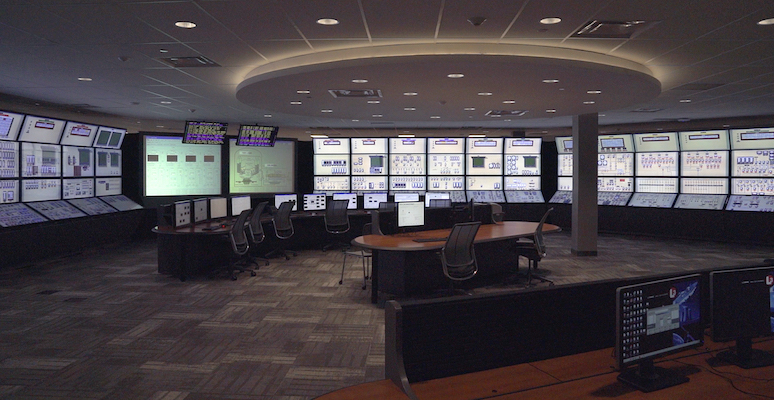 By way of example, SNC-Lavalin is working with Moltex Energy Canada in Saint John, N.B., which was selected by its province’s government and NB Power to develop an SMR for initial deployment next to the Point Lepreau Nuclear Generating Station in Maces Bay, N.B. Planning and preparatory work for this deployment are already well underway.

“Moltex’s design will power itself using spent nuclear fuel,” den Decker explains, “which will help reduce the volume of spent fuel that needs to be stored.”

SNC-Lavalin is also poised to support other SMR vendors, which range from large original equipment manufacturers (OEMs) like GE Hitachi and Westinghouse to new start-ups, some of which are focused on older reactor design concepts that were never fully realized. As such work ramps up around the world, den Decker emphasizes the geopolitical factors in play.

“Canada was leading the way on SMR development three to four years ago, seeing real promise and developing a road map,” she says, “but now some parts of the world, even the U.S., are leapfrogging us with greater funding. In all countries, federal support is very important.”