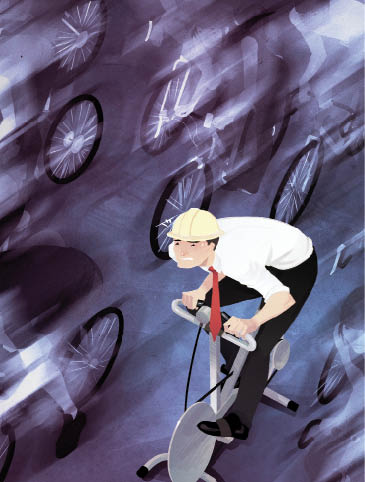 Illustration by Tanya Lam/Three in a Box

It is great that engineers are designing such buildings since our fossil fuel energy resources are limited. It took millions of years for nature to produce our oil and gas that will last only a few centuries. We will run out. Burning fossil fuels is also changing our climate, leading to a world that will be quite different from what we know.

However, until we look at all our buildings – old and new – our engineering efforts won’t make a significant dent in the total amount of carbon fuels the building sector consumes. A 2006 report done by the U.S. Energy Information Administration indicates that up to 48% of our carbon emissions come from buildings.

Although in Canada there’s a trend towards LEED certification and high energy efficiency for new large buildings and most government projects, in other building types the number of what I’ll call “first-cost” buildings still predominates. A developer who builds shopping centres and small office buildings is mainly interested in getting the building completed as quickly and inexpensively as possible so that he can start making some return on his investment. Lifecycle cost is losing out to first cost. Any special funds are spent on what the potential client will see – exteriors, and entrances and atriums to enhance the building’s first impressions.

Most non-specialists can’t tell an efficient HVAC and lighting system from an inefficient one. The buildings must only meet current building codes. Yet as we see in published projects like the one in Saskatoon, the efficiency of our buildings may easily be improved by well over 50% using known and readily available technology.

Engineering consultants are in a difficult position. You can try to educate your clients about lifetime costs and energy efficiency, but if you push too hard, you lose the client to a competing engineer who is happy to provide the lowest cost solution. Although it would be nice to limit yourself to clients who think like you do, engineers usually want, and sometimes need, all their paying clients.

Developers go for the quick return

When equipment in older buildings comes to the end of its service life, usually 15 to 25 years, owners often simply replace it with equipment that has the same energy efficiency. There is rarely an incentive to spend more money on equipment with future energy paybacks as this would entail engineering costs, as well as the higher first cost involved in purchasing more efficient systems.

In many situations, the owner’s cash flow is limited and although they would like to make their building more energy efficient, they cannot afford the capital required to make the necessary upgrades. There is little financial help for these owners, and the provisions in our building codes on non-life safety issues don’t require updates to existing systems.

The tendency to always opt for technologies with a low first-cost will continue as long as developers can pass the running energy costs on to their tenants, and as long as our building codes don’t require higher efficiency systems. Unless such changes happen, readily available and proven technologies like energy recovery ventilators (ERVs) and heat recovery ventilators (HRVs) won’t be added to rooftop units in mass quantities; condensing boilers with low temperature loops won’t replace cheaper boilers and high temperature distribution loops; and heating the incoming air with some form of heat exchanger will not be the standard. Yet in public buildings such as schools, offices and restaurants where there is a high density of people, the practice of heating or cooling the outside air to meet our codes is often what uses the most energy.

Standards are not rigorous enough

In Canada’s National Building Code (and Ontario’s), commercial buildings have lower insulation requirements than are required in Canada’s R2000 voluntary standard for residential buildings. The R2000 standard is a success because it is a standard that the potential buyer knows will give him an energy efficient home without having to know any details. Buyers expect new houses to be R2000 compliant.

Yet even with residential buildings we could easily do better if building orientation were added to the R2000 standard. Mostly today, developers just line up the houses according to the direction of the street they face. Yet if a house is situated such that it has large windows on the west wall, the load on the air-conditioning is significantly increased. Other orientations are not so energy-consuming. South facing windows will help heat the house in winter while not giving the additional air-conditioning load of west facing windows. North facing windows never see the sun, so they won’t get the heating of the winter, but they also won’t get the additional air-conditioning load in the summer. East facing windows only see the morning sun and are in the shade during the heat of the day.

The insulation in modern commercial buildings with glass exterior walls cannot give the same insulation values as a wall in an R2000 home. A single glass pane has an approximate insulation value of R0.9, whereas a standard double pane increases this value to R1.6. This value may be further increased by using a non-greenhouse gas such as Argon between the two glass panes to limit heat transfer. However there are no R20+ glazing systems that I know about. It is common practice to provide radiant heat under windows in commercial buildings, a clear sign of heat loss in this area. We should be designing buildings that don’t require such additional mechanical solutions to keep the occupants comfortable.

The roofing insulation on commercial buildings is normally about half the R-value of an R2000 home. Meanwhile, simple solutions such as that proposed by Stephen Chu, the U.S. Secretary of Energy, of using only white roofs that would reflect rather than absorb the sun’s rays, are not commonly adopted.

Our building codes sometimes hamper us. They could, for example, institute motion sensors in stairwells to turn on lights, as is done in Europe. Here we have to have stairwell lighting on all the time. Why are all our buildings lit up when no-one is around? Once a large office building is occupied, many times it is possible to remove numerous fluorescent bulbs because whereas the light levels are designed by the engineer to be at a constant level, the light is not needed in all areas. In this way I know of one building where several hundred lights were able to be removed from certain areas. We can do many such simple things that have a substantial effect on our energy use.

There are other practical, money-saving strategies that we have the capacity for but are not doing. Our DDC control systems, for example, can be designed to measure the energy use of our buildings to give the operators an ongoing evaluation. We can’t know if some new idea or change works unless we measure it. There is specialized software available that allows organizations to benchmark themselves against their peers anonymously. One web-based service, for example, has a simple user interface with a green, yellow and red indicator to gauge efficiency. If you want to know watts per square metre you can go deeper into the program.

In short, there are thousands of buildings that could be upgraded with a life-cycle payback. Yet too little is being done because up-front money has to be spent and many owners, even if they would like to, cannot afford energy efficiency updating.

Energy efficiency upgrades should not be considered a luxury, but a requirement, and there should be more federal and other government loans and grants in place. David Archer of the University of Chicago, in his first year lectures about climate change entitled “Glo
bal Warming, Understanding the Forecast” (http://geoflop.uchicago.edu/forecast/docs/lectures.html), calculates that we must reduce our carbon footprint by 50% just to maintain the present level of CO2 in our atmosphere, assuming the present carbon sinks do not change. (The latest information shows that the carbon sinks are changing — being reduced.)

We have shown that achieving this 50% reduction in our buildings is technically feasible and practical with our present knowledge and equipment. We just have to commit to making all our buildings more sustainable. Our governments must also commit more resources to helping us become more sustainable if we are to meet our international obligations for carbon emission reductions. cce

Lee Norton, P.Eng. is a former consulting engineer and now editorial advisor to Canadian Consulting Engineer. He lives in St. Catharines, Ontario.“In short, there are thousands of buildings that could be upgraded with a life-cycle payback. Yet too little is being done because up-front money has to be spent and many owners, even if they would like to, cannot afford energy efficiency updating.“