The Airport Terminal Building was designed to meet stringent energy performance criteria set by the Government of Nunavut and the LEED Green Building Rating System. 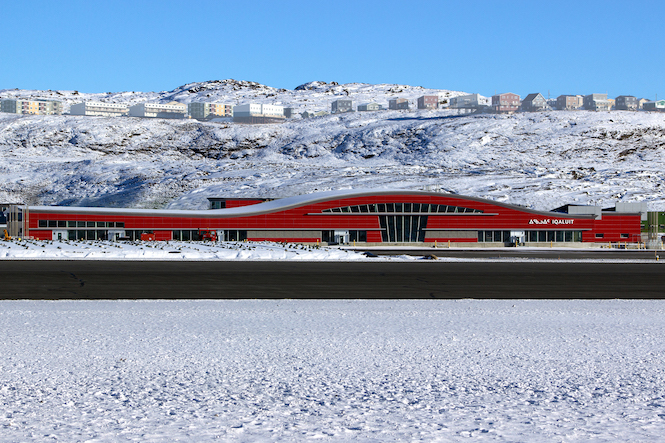 Iqaluit, formerly known as Frobisher Bay, is now the capital of Nunavut, the Territory spanning the eastern half of Canada’s Arctic. The new Airport Terminal Building, slated for first flights in August of this year, is the first P3 (public-private partnership) airport building in North America. While a relatively modest size at just under 10,000 square metres, this is a very important facility, as it serves not only the immediate community, with all its government and public services, but also as the hub connecting the remote villages of the Territory with the south.

As there are virtually no roads in the far north, the airport takes on an especially important role in the community. So Stantec’s role as the designers (architect and prime engineer) was to bring a strong architectural presence and distinctive cultural character, commensurate with the airport’s dual role as critical transportation infrastructure and as an important community meeting place in the capital.

A simple rectangle design minimizes the number of building corners, and the sinuous curving roof minimizes surface area of the building envelope, and provides a smooth surface for winds to scour the roof free of drifting snow.

Given the severe climate and the high cost of construction in Iqaluit, a compact building form is the most effective for both capital cost and energy efficiency.

For passenger convenience and operational efficiency, the building has been designed with all the public functions at the grade level, with a smaller, central, second level for administration and building services.

In plan the terminal is a simple rectangle, minimizing the number of building corners. The roof form is a sinuous curve containing both the single story and the two story areas. This form achieves two goals. It minimizes the surface area of the building envelope, and provides a smooth continuous surface for the prevailing winds to scour the roof free of drifting snow.

Iqaluit is actually a ‘desert’ climate with relatively low precipitation. However whatever snow does fall stays for the nine months and, with the high winds, snow drifts become a significant issue.

At the terminal building a major drift would certainly form at the lee, or south, side of the building. To address this we introduced a building element well tested in the north — a ’snow scoop’, designed to move the drift away from the building face. 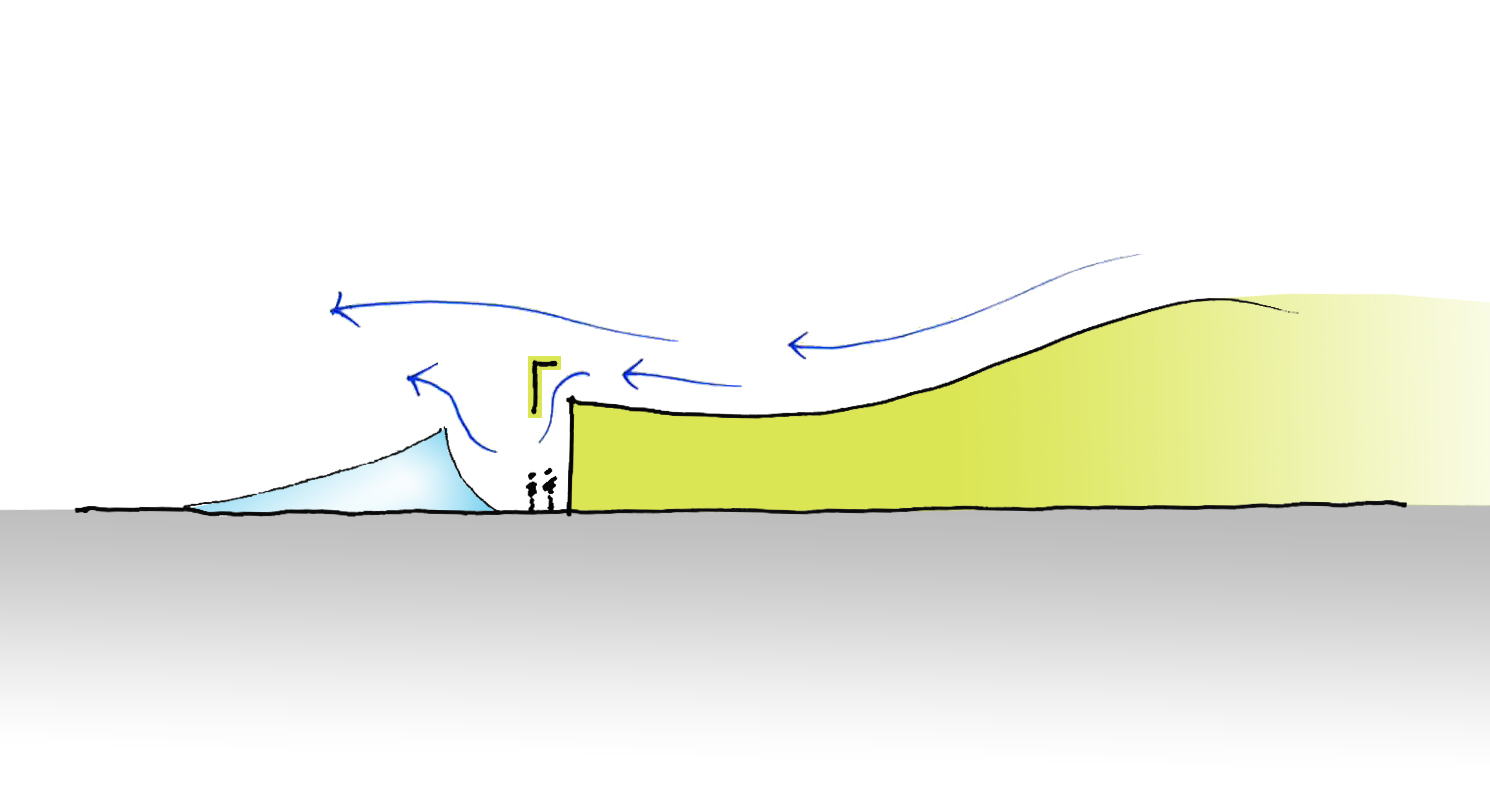 The ’snow scoop’ on the south side is designed
to move drifts away from the building face.

This is a metal panel, the width of the building, two metres high, and set one metre off the end of the roof.

The way this functions is the north wind blowing over the length of the roof, hits the scoop and is deflected down the façade to the ground and then carries on south, taking the snow with it. So the drift, rather than forming against the façade, forms about 10 metres away from the building.

This concept was modelled by our wind consultant, RWDI, in a water tank with a 3D model of our building and beach sand standing in for snow. The sand drifts formed, as predicted, well clear of the model building.

Last winter, with the actual snow scoops in place — the snow drifts replicated exactly the sand drifts in the model.

The first question many people ask, when I tell them we are building a new airport terminal building in the Arctic, is “How do you deal with global warming?”

This is an especially pertinent question. Many of the buildings in the far north are built on stilts — which allows the wind to blow through, dissipating the building heat and allowing the snow drifts to pass by.

However, at the approximate dimensions of a football field, our building is too large for this strategy and the bedrock on the site is too deep to reach with the foundations. Consequently, our building is designed to ‘float’ on the permafrost.

Permafrost is overlain by an ‘active’ layer that thaws and freezes through the seasons, while the ‘permanent’ layer below is perpetually frozen. The foundations for the terminal are designed deep enough to rest on this solid, frozen layer. How do you keep the heat from the building radiating down to the permafrost — melting the support and allowing the building to sink into the resulting slush? 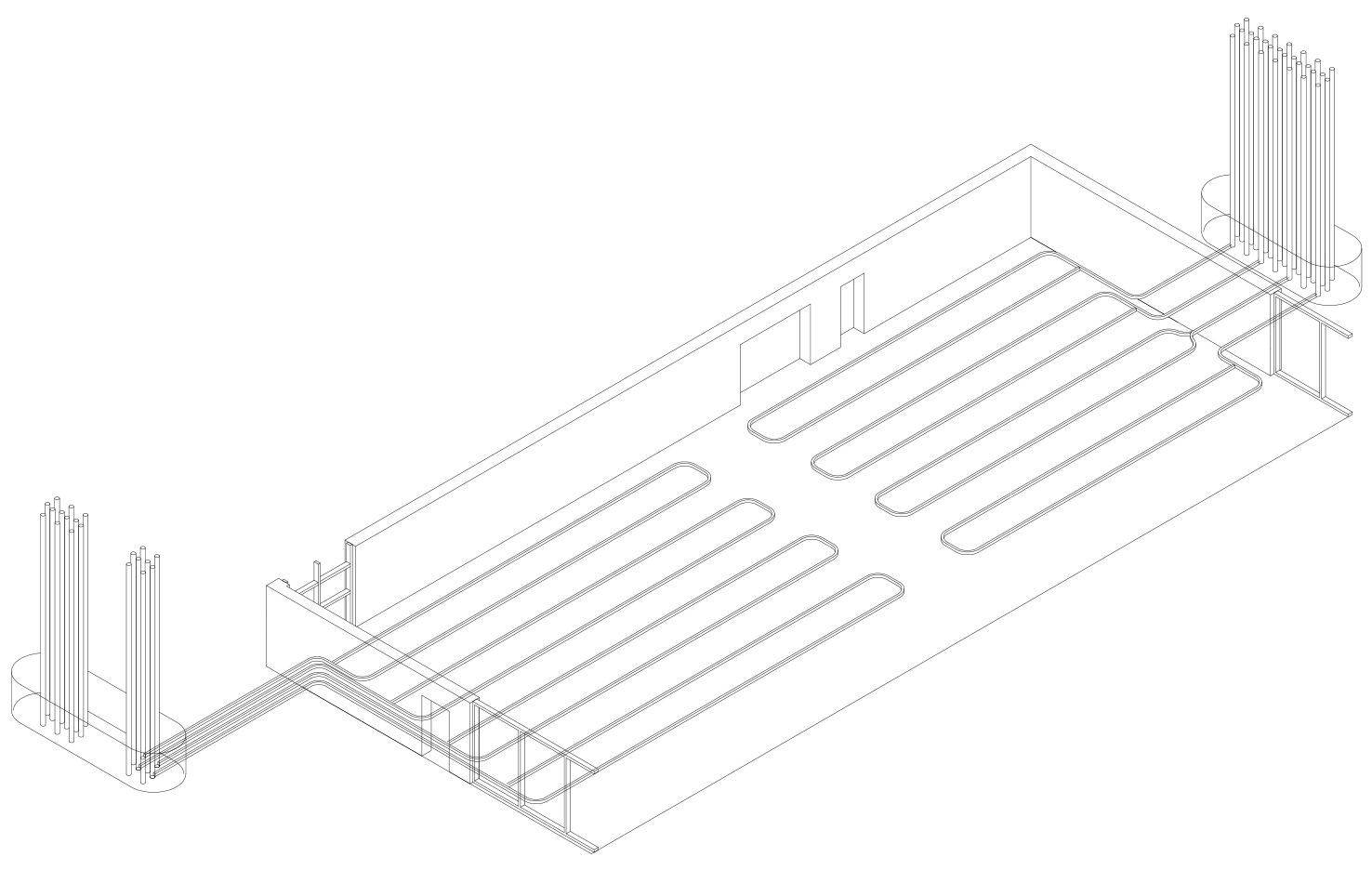 Tetra Tech EBA worked with Arctic Foundations Ltd, to design and install a system of ‘thermosyphons’ to draw away heat before it reaches the permafrost below.

Tetra Tech EBA, a specialist consultant in this field, has worked with the subcontractor Arctic Foundations Ltd, to design and install a system of ‘thermosyphons’.

As the name implies this system syphons the heat away before it reaches the layer of permafrost below. First there is a 200 mm thick layer of rigid insulation, located beneath the slab and projecting three metres beyond each edge of the building, to impede heat flow into the ground. Below that is a series of 25 mm diameter horizontal pipes, ‘evaporators’, embedded into a layer of stable gravel, the new, engineered active layer.

The pipes are spaced about 1.5 metres on centre, beneath the entire footprint of the building. These pipes lead to clusters of vertical ‘radiators’, eight metres high, positioned at five locations around the perimeter of the building. This is a passive system filled with CO2 gas. Any building heat that makes it past the insulation is absorbed by the stable gravel in the active layer, where it vaporizes the gas in the evaporators. In the winter, the colder air then condenses the gas in the radiators into liquid, which, now cold, then flows back into the evaporators below, where the warmer ground again causes the gas to vaporize.

The cycle repeats, as long as the air is colder than the ground, maintaining the frozen state of the permafrost below. 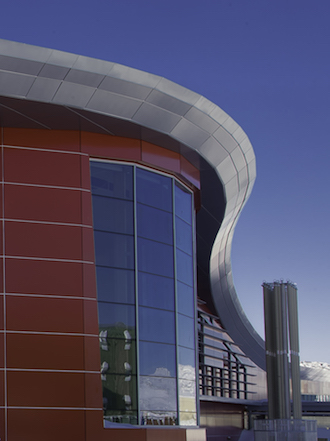 Vertical eight-metre-high ‘radiators’ are positioned at five locations around the perimeter of the building.

As in most northern communities, energy is very expensive in Iqaluit and the systems somewhat erratic and unreliable. Fuel oil is shipped in by tanker in the ice-free months and converted to electricity in the city’s generator plant.

In order to optimize their energy usage and to provide for self- sufficiency, the client and the design team have chosen a ‘combined heat and power’ (CHP) system for the new terminal building. This operates in parallel with the local power utility.

The system was prefabricated and tested in the U.S. and shipped to Iqaluit for installation.

The airport’s own diesel fuel supply is used to power the two CHP generators. These supply both normal and standby power for the terminal. The heat from the system is then captured to serve the heating, ventilation and air conditioning (HVAC) systems — providing substantial energy savings. 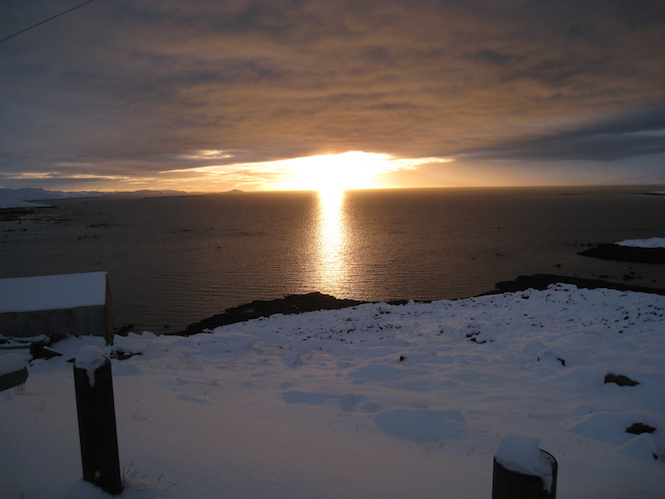 In the far north, through those long winter months, daylight is a valued commodity. However with the extreme weather conditions, there is a delicate balance in optimizing the fenestration and daylight with a high efficiency envelope.

Consequently the Client brief was very proscriptive for both the percentage of windows and the quantity of natural light in the public spaces. This requirement was 20% glazing in the façade and an average lux level of 75.

The essential focus for daylighting is the high volume in the centre of the building — bringing light deep into the rotunda, into the holdrooms and through the connecting corridor between.

Broad windows on the west provide panoramic vistas from the holdrooms. Clerestory windows provide high morning light into the check-in hall. The upper level offices benefit from their warm, interior location while still having a long view to the west and an intermediate interior view to their operations in the holdroom below.

The success of this project lies in the subtle integration of the operational imperatives of an airport, the technological solutions to environmental challenges and an authentic response to the culture and community. The new airport feels like it always has belonged in its place. cce

Noel Best is a Principal at Stantec. He has been practicing architecture for 38 years. In addition to his usual role as design principal, Best is a specialist in passenger flows and wayfinding. He’s well versed in ensuring that the airport planning, material selection, and lighting design all support intuitive travel.