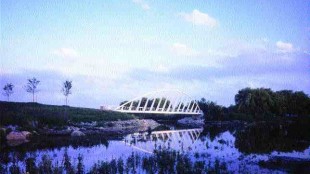 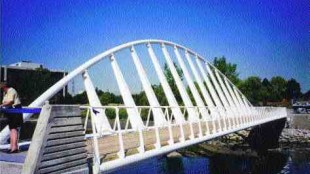 Tilting arch and shallow deck play a vital functional as well as an aesthetic role.

The new bridge for pedestrians and cyclists across Mimico Creek at the west end of Toronto extends the Waterfront Trail and is part of an ongoing program of improvements along the city’s Lake Ontario shore. Delcan Corporation won a competition to design the bridge. Though the specification was for a small structure to cross the 90-metre wide creek, Toronto’s Department of Parks and Culture wanted the crossing to be visually outstanding. Nearby is the Humber River Arch Bridge which has won many national and international awards and is an outstanding landmark on the trail. The new bridge was envisaged as a companion piece to that bridge, rivaling it visually but on a smaller scale.

Inspired by the work of Dr. Santiago Calatrava and with important input from this renowned international engineer, Delcan proposed a single-span reverse inclined arch structure. This type of bridge has only rarely been executed previously and has no precedent in North America.

Of all bridge forms the arch is most easily and intuitively appreciated by the lay public because the structure’s shape usually reflects its function exactly. The Mimico Creek Bridge is a rare exception to these rules and causes passers-by to stop and decipher its structural behaviour. The deck seems to be a very shallow, two-dimensional structure which somehow stays rigid. At the same time, the arch inclines so much from the vertical that it appears precarious. The result is a striking visual tension.

There is no doubt that a very inexpensive concrete or steel bridge with a much more simplistic design could have been constructed at the site, but this bridge’s enhanced aesthetics integrates intangibles like shadow patterns on the ground and the reflection of light on water.

Though it seems to deny its structural function, the arch in fact greatly affects the behaviour of the bridge. It does so by combining conventional arch action with resistance to displacements out of plane. In essence, the arch is incorporated in a three-dimensional space frame. This three-dimensional frame action and torsional displacement under pedestrian loads provides the bridge with its extremely good structural behaviour notwithstanding the very shallow deck.

It was clear that no innovative and striking bridge could be constructed over the full width of the creek within the owner’s budget. Hence Delcan suggested that the width of the creek at the bridge be reduced from about 90 metres to 44 metres and the bridge width was scaled down from 3.5 metres to 2.5 metres to reduce costs. With the creek reduced, wetlands were constructed at the site which provide added interest to the bridge users as they pass by. The structure was completed on schedule and on the $650,000 total budget in September 1998.

Client/owner: City of Toronto Department of Parks and Culture