Britain's centrepiece for the Millennium celebrations, the largest dome in the world, was completed last fall. Now workers are scurrying to build the extraordinary interiors of the large exhibition an... 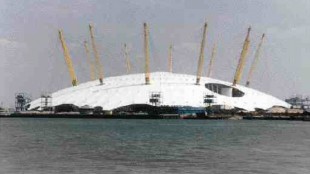 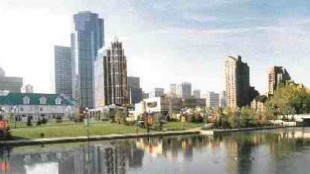 Artist’s rendering of Millennium Tower in the centre of Calgary.

Britain’s centrepiece for the Millennium celebrations, the largest dome in the world, was completed last fall. Now workers are scurrying to build the extraordinary interiors of the large exhibition and performance space in time for the Year 2000 New Year’s Eve bash. One of the exhibitions inside will be a mega-scale human body which visitors can enter and explore from inside.

Designed by consulting engineers Buro Happold of the U.K. and architect Richard Rogers, the dome has a roof that stretches over 20 acres. It consists of woven fibreglass panels coated with Teflon and is hoisted on steel cables attached to 12 lattice masts. It is strong enough to support a loaded jumbo jet.

The 550 million pounds sterling (Cdn. $1,430 million) structure is on an old gasworks site on the south bank of the River Thames at Greenwich in London. The location marks earth’s zero longitude line and has been the reference for standard time since 1884.

The Millennium Dome is just one of a host of building projects which the British government has sponsored through its national lottery to mark the Gregorian calendar milestone. In other countries too there has been lots of activity. In France the Eiffel Tower is already lit up with numbers counting down the days. In Israel, Bethlehem is remaking its infrastructure, and Rome is building a new cathedral and restoring many monuments.

In contrast, Canada’s Year 2000 celebrations are decidedly low key. The federal government has announced several projects, but no major building. Any so-called “Millennium” building that is going on is scattered and often privately sponsored. A museum of science and technology in Montreal’s Old Port is opening in 2000. Otherwise most of the action seems to be in Calgary. The Calgary 2000 society has managed to organize a Millennium Park, a Millennium Gateway to the city, the rebuilding of historic Fort Calgary, and new carillon bells in the Calgary Tower. As well, one of the city’s new office towers is to open early in the new year and is named after the event. The 23-storey Millennium Tower under construction in the Eau Claire area is owned by Oxford Properties Group. Consulting engineers on the $90 million project include Mulvey & Benani (electrical), Smith & Andersen (mechanical), and Quinn Dressel (structural). Architects are Webb Zerafa Menkes Housden.