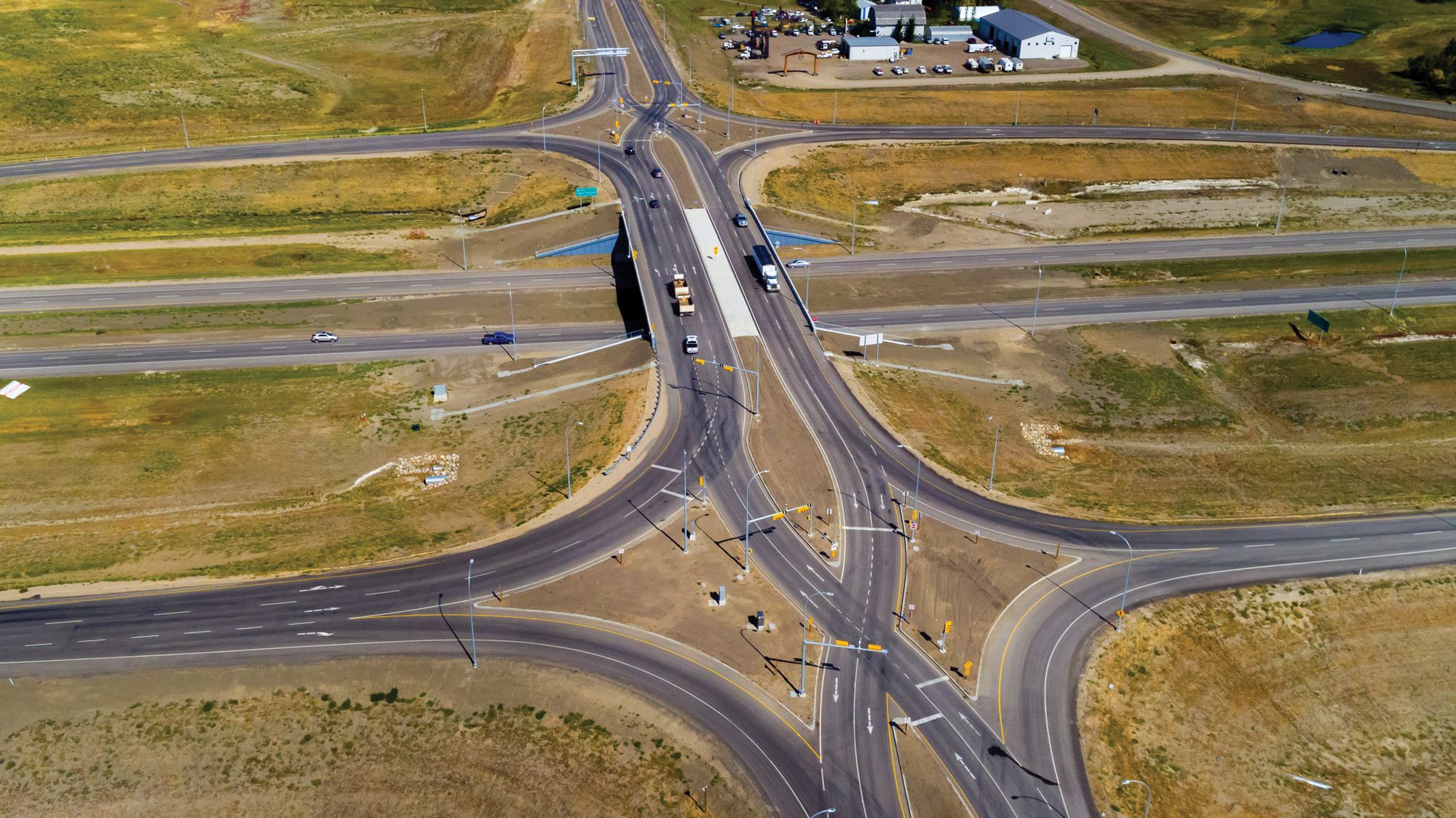 Associated Engineering (AE) and CIMA+ led the owner’s engineer team for the Regina By­pass, the largest trans­portation project in Saskatchewan’s history and the first pub­lic-private partnership (P3) for its ministry of highways. Substantially completed in 2019 and comprising 60 km of 4-lane high­ways, 55 km of service roads, 33 bridges, 12 interchanges and significant Intelligent Transportation System (ITS) infrastructure, the $1.88-billion project was delivered on time and under budget.

The ministry had identified a need for a bypass around Regina as a result of safety concerns, the area’s rapidly growing popu­lation, economic growth requirements, traffic congestion and access issues. Specif­ically, between 2006 and 2011, eight deaths and 600 collisions occurred on Highway 1 between Regina and Balgonie—24% higher than other sections of Highway 1 within Saskatchewan.

While the need for a bypass was great, the magnitude of the project was far larger than any other ministry undertaking to date. Within three months of securing the owner’s engineer, the owner’s team (i.e. government and consultant) worked collaboratively to develop a reference concept design and cost estimates for the business case. The design moved traffic away from the city while al­lowing local connections; and to improve safety, existing intersections along the highway were replaced with grade-separat­ed interchanges.

A value for money assessment, under­taken through SaskBuilds and Procurement, determined using a design-build-fi­nance-operate-maintain (DBFOM) P3 model would realize a significant cost saving and allow the project to be completed ap­proximately six years sooner than using a traditional approach. The federal govern­ment provided $200 million in support of the project as a P3.

During construction, the owner’s team audited quality, environmental, health and safety systems and technical compliance, oversaw non-conformance tracking and reporting and undertook contract adminis­tration. Mutual trust was developed with the project company, which helped to minimize claims. Indeed, the bypass opened in 2019 with no major claims.

Working as a team

The concept design provided appropriate access points to the highway and service roads, which allowed a free flow of traffic while enabling rural communities and businesses to remain connected and pos­itioned to grow. 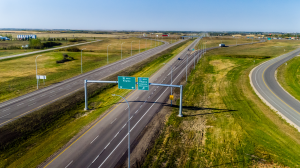 The owner’s engineer team collaborated with Ernst & Young and SaskBuilds to de­velop the business case that supported pro­ject delivery under a P3 model. This model saved approximately $380 million compared to traditional design-bid-build (DBB) deliv­ery, minimized risk to the ministry and al­lowed the project to be built more quickly.

The ‘one team’ approach involved devel­oping an online project collaboration site to support communication and information exchange. Members of the team collaborat­ed to address issues, review lessons learned, undertake risk workshops, identify risks and allocate them to the parties best-positioned to manage them, ensuring value to the government.

A key concern was the number of teams that would bid on the works. SaskBuilds reviewed the Canadian market so the team could promote the project at the right time, thus attracting multiple bidders.

With up to 200 personnel from different organizations across North America work­ing on the project at the same time, the on­line collaboration site ensured secure data storage, provided easy access to information and helped foster and integrate the ‘one team’ culture with ministry staff. This tool helped manage more than 7,700 reviews, 800 fabrication and construction audits and 100 quality, environmental, health and safety management audits.

The bypass was built within the Glacial Lake Regina basin. The route bisected ephemer­al drainage, creeks and streams that were essential to maintain, so as not to impact the local ecology or agricultural practices.

Easily maintainable and reliable drainage strategies were established, such that dur­ing rainfall, the original overland flows were maintained without compromising operation of the new highway or putting at risk existing local establishments or land features.

The greenfield portion of the project re­quired a significant amount of fill material. Fill sources were established along the by­pass route to minimize the need for long-haul routes and the associated environ­mental impact.

Resurfacing of Highway 1 was part of the project. The owner’s engineer team worked with the ministry to amend its Pavement Manual to enable the contractor to recycle as much of the existing pavement as pos­sible, reducing the need for new materials and making the project more environment­ally sustainable.

One month after the bypass opened, the provincial government reported an average of 1,230 trucks were using it daily, taking them off Regina streets. It is estimated the free-flow highway will reduce greenhouse gas (GHG) emissions by 1.5% and fuel consumption by nearly 300 million L over 30 years.

The bypass also reduces transportation noise within the city and improves air quality, thanks to large reductions of a var­iety of compounds that contribute to air pollution from vehicle idling.

The collaborative approach facilitated the development of innovative, cost-saving solutions. For one, the project included Canada’s first diverging diamond inter­change in a rural area, reducing queuing and resulting in safer, free-flowing left turns. This interchange opened at Pilot Butte one year ahead of schedule.

The ITS infrastructure developed for the Regina Bypass project provides building blocks for broader ITS use across Saskatch­ewan. It includes a data management cen­tre, a significant number of field devices in the Regina area and a wireless network to transmit data.

The Highway 11 interchange has been constructed in a manner to allow for future expansion of the Regina Bypass to the north and the addition of more bridges and ramps as traffic volumes increase and a new level of service is required.