A new parkway built in the Windsor-Detroit trade corridor of southwest Ontario has long stretches sunk below grade. 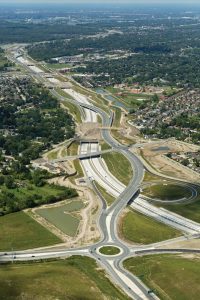 The Rt. Hon. Herb Gray Parkway is the access road component of the new end-to-end transportation system identified by the Detroit River International Crossing (DRIC) study through Windsor and Essex County in southwest Ontario. The new parkway, constructed between 2011 and 2015, is 11 kilometres long. It consists of a below-grade international highway connection (Highway 401), an at-grade local service road network (Highway 3), and includes approximately 20 kilometres of multi-use trails and 300 acres of green space.
Completed in 2014, the parkway also includes three interchanges, 14 bridge structures, 11 cut-and-cover tunnels, 12 signalized intersections and a multi-lane roundabout. It extends Highway 401, the main east-west artery from Toronto, to a future international customs inspection plaza and new river crossing to Detroit, Michigan. The Windsor-Detroit corridor is Canada’s busiest land border crossing and carries approximately one third of the trade between Canada and the U.S.
The parkway’s green space was designed to include extensive ecological connections to create a “road-in-a-park,” minimizing the impact of this major international highway connection through an urban centre.
To achieve the objective of reconnecting communities on either side of the previous at-grade roadway, the Highway 401 portion of the parkway was built about 8 metres below-grade. This section of the road travels alongside deep earth berms and retaining walls, through 11 tunnels, and under six bridges. The landscaped tunnel tops, or land bridges, maintain links between communities on each side of the parkway, providing road and trail crossings, and continuous ecological habitat.
The parkway was a $1.4-billion design-build-finance-maintain project. It was undertaken by the Windsor Essex Mobility Group, who subcontracted the design and construction portion to Parkway Infrastructure Constructors, a joint venture of Dragados, Acciona and Fluor. The multi-disciplinary design consultant team consisted of 350 people from Hatch Mott MacDonald, Amec Foster Wheeler, Dillon Consulting and Lea Consulting.
As this is Canada’s busiest land border crossing, with up to 11,000 transport trucks per day accessing the existing bridge, one of the most important aspects of the project was keeping the road open during construction, with limited exceptions between 1 a.m. and 5 a.m. To achieve this, the team devised comprehensive plans for managing and diverting traffic and coordinating construction staging. Approximately 26-lane kilometres of road diversions were constructed north and south of the construction corridor to keep traffic moving.

Retaining walls and
difficult soil conditions
The project team found innovative ways to minimize the use of materials and shorten the construction times. One innovation related to soil improvements for the foundations and backfill for the retaining walls along the buried sections of the roadway. Proprietary reinforced soil system (RSS) retaining walls were used instead of cast-in-place reinforced concrete. The RSS interlinked concrete panels were secured by straps laid through compacted granular backfill or lightweight concrete, and founded on reinforced granular mats. These multiple layers of granular mats separated by geotextile material were used to better distribute wall backfill pressures onto the weak native soils. Lightweight cellular concrete was used as backfill for the RSS wall systems to meet global stability and wall foundation bearing pressure requirements. This is the first application of lightweight cellular concrete in RSS walls in Ontario.
Since RSS walls are prefabricated elements that are lighter and more flexible than traditional concrete walls, they required less substantial foundations, reducing the construction time. Also, RSS walls are produced in a controlled environment and therefore have better aesthetics. A stability issue of weak soil below the approximately 10-m high fill embankments on the highway’s west end was resolved by importing silty clay fill from the east end and using it as fill material, along with the use of staged soil preloading and vertical wick drains. This strategy expedited settlement of the soils and improved the undrained shear strength of the weak and compressible clays.

Design of parkway tunnels
The tunnels were unique structures and presented challenges during design and construction. They comprise a large portion of the parkway, covering over two kilometres, while supporting the existing municipal road system and utility corridors above. However, the majority (93%) of the tunnels are covered with up to 850 mm of soil and vegetation that help to support a Carolinian Prairie landscape throughout the parkway. For example, Tunnel T5, the largest, carries over 14,000 square metres of landscaped area and recreational trails above both Highway 3 and Highway 401, a location which includes 10 lanes of traffic and two ramp connections.
Foundations. All tunnels on the project were built using cut-and-cover construction. This work involved a 5-7 metre deep cut into lacustrine clay material. Since this clay is of a comparatively low strength as foundation material for structures, the design team recommended the use of deep steel pile foundations. All steel piles were driven to bedrock roughly 15-25 metres below the roadway level, resulting in several kilometres of steel piles being used for the abutment and pier foundations at each tunnel. At the abutments the engineers were forced to consider alternative lightweight backfill to eliminate geotechnical stability and settlement concerns.
NU girders. The large number of precast concrete girders required on this project provided a good opportunity for the design-build team to introduce an alternative girder shape called the Nebraska University, or “NU” girder. When compared to the Canadian Precast Prestressed Concrete Institute (CPCI) girder traditionally used in Ontario, the NU shape is structurally more efficient, requiring significantly fewer girders, and reducing fabrication and construction time. These girders have a wide top flange providing a better worker platform and shorter deck slab spans. The wide bottom flange has increased strands and flexural capacity, requiring fewer girders compared to conventional “I” beams. As a result, 485 fewer girders were needed, saving bearings, precast panels and time.
This was the first use of NU girders in Ontario. Prior to this project the CPCI “I” type precast concrete girder was used exclusively by the Ontario Ministry of Transportation (MTO) on all new bridge structures with precast “I” girders.
Introducing the NU girder type resulted in the parkway design team having to develop new standard drawings. Working closely with the constructor, MTO and the precast girder manufacturer’s representatives, the team produced a final girder design that met the project requirements as well as the tight construction schedule. The NU girder has now become one of the standard types used by MTO for bridge structures across the province.
Fire protection. One requirement was that the precast girders used for the tunnels must have a much higher standard of fire protection, at a level normally only applied to long bored tunnels. The design-build team, in collaboration with international fire experts, developed an in-house state-of-the-art fire design criteria based on complex heat transfer analysis. The final solution required a modified NU girder shape with an increase in concrete cover of up to 50 mm at some locations,  and the addition of polypropylene fibres into the concrete mix to prevent explosive spalling. Assumptions used in the fire design criteria were verified by laboratory fire tests undertaken by the National Research Council in Ottawa.

Restoring the ecosystem
The tunnel tops and surrounding greenspace landscaping establish both ecological and community connections, one of the goals of the project. Approximately 20 kilometres of multi-use pathways run on both sides of the corridor, with frequent cross connections. The trails include extensive wayfinding and interpretative signage, laybys, urban rest areas and trailheads.
The parkway design minimizes its impact on the rare Carolinian Prairie ecosystem to the south, which is a natural heritage area with several designated zones. Protective steps taken included relocating and providing unique habitats for species at risk, and creating new wetland and fish compensation areas.
Protection work was not limited to the design and future use of the greenspace areas. Species at risk permits awarded for construction included the requirement for extensive measures to protect two snake species found in the area. This meant training for all 7,000 people accessing the site during construction, a snake “hotline” that linked directly to a herpetologist who was responsible for removing snakes found in the construction zone, and over 13 kilometres of protective fencing that prevented animals and snakes from entering the construction zone. The fencing was specially designed with a geotextile fabric that prevented Eastern Foxsnakes (a climbing snake) from going over the fencing.
There are seven pedestrian bridges linking the trail network, and their aesthetic design afforded an opportunity to introduce a First Nations theme, using colours and teachings of the clans of the local Anishinaabe First Nations, as interpreted by members of Walpole Island First Nation.
In many areas, noise walls were used to mitigate the impact of highway sound. They have patterning that mimics a grassland, while several RSS walls feature a leaf pattern reminiscent of the Oak Savannah found in these ecological areas.

Roundabout benefits
The parkway includes a  multi-lane roundabout at the east end of the project where Highway 3, Highway 401 and a local interchange all converge. The roundabout provides a free-flow of traffic previously unavailable at the traditional signalized intersection. The benefits of a roundabout are that they reduce traffic speed and improve safety. They also require traffic to make fewer stops than with a signalized intersection, thereby reducing congestion. There are other, long-term benefits, including eliminating the maintenance and electricity costs associated with traffic signals, and reduced noise and air pollution from idling vehicles.

Innovations and coordination
Throughout design and construction of the project, obstacles were overcome by innovative engineering. On the environmental side, the design team was able to receive clearance for over 80% of the site in less than one year.                           cce