Energy saving improvements at the University of Calgary

The University of Calgary has taken a major stride in instituting a long-range energy conservation and performance improvement program. The program is expected to save the university over $3.4 million... 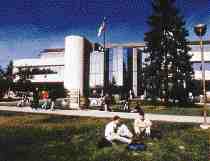 The University of Calgary has taken a major stride in instituting a long-range energy conservation and performance improvement program. The program is expected to save the university over $3.4 million in energy costs within 12 years.

The campus-wide initiative has a long range program with four objectives: (1) to improve environmental conditions such as temperature and air quality; (2) to reduce energy consumption and the associated costs, (3) to improve the school’s infrastructure such as mechanical systems and physical structures, and (4) to increase the level of control, monitoring and reporting of mechanical system operating conditions.

The boost that delivered the early, high dollar savings came in April 1996 when the energy management team of the Landis Division of Siemens Building Technologies, Ltd. (formerly Landis & Staefa, Ltd.) applied global power factor correction to the campus electrical feeds. The measure substantially reduced the cost of electrical energy throughout the campus and gave the university the early savings return and the confidence to move full speed ahead. This measure alone has already netted the university $158,000 during 1997-98, and is expected to save even more this year.

Power factor correction addresses the portion of an electric utility customer’s monthly bill that can be decreased without altering usage. It is the difference between the total power delivered by the utility and the portion of that power that does useful work within the user’s facility. Mathematical measurements of the university’s electrical systems revealed that the utility was transmitting more current and delivering more total power to the facility than was necessary to do useful work.

Siemens advised the university that global, or campus-wide, power factor correction would reduce its power factor penalties while improving the overall voltage regulation and system capacity. The university concurred and high voltage capacitor banks were installed for the two largest of the facility’s six main electrical feeds. The capacitor banks, installed on the load sides of the meter connection points, supply the reactive portion of the current locally and relieve the utility and its transformers of transmitting the additional current.

As a result, the 12-year energy conservation and performance improvement program was launched, and the first phase which focused on the Administration Building is now complete. This phase also consisted of campus-wide building metering or sub-metering to monitor the electrical demand and consumption for each of the 30 main buildings on campus.

The sub-metering provides valuable facility management information, according to Murray Sloan, P.Eng., mechanical projects engineer for the university. “The six main feeders are metered by the utility,” says Sloan, “so with only that information we had no idea how each building was using energy. We worked with Siemens to install electrical meters and flow meters on the hot water and chilled water systems.”

The centrepiece for the first phase and the entire program is the installation of Siemens Building Technologies’ System 600 Building Automation System with Direct Digital Control. This new BAS replaces the university’s existing outdated automation system and enables Sloan and other staff to centrally monitor and control all the HVAC systems.

The next phase provides full control for the Bioscience Building which is now under construction. Proposed plans for the future involve an extensive lighting retrofit, and the expansion of BAS capabilities throughout the campus. These will include the addition of Variable Air Volume (VAV) conversions of main handlers, 150 digital fume hood controllers, a general exhaust system for the laboratories and power quality monitoring.

Building systems maintenance is a high priority with the facility management. Many of the buildings’ electric motors, for example, are being replaced with high efficiency types. The BAS also cycles duplex motors and tracks hours of operation to help extend equipment life, lower operating costs and reduce the univer- sity’s capital expenditures over the long term.

The university, which has approximately 1,700 academic faculty and a student body of over 23,000, is excited over the improvements and is committed to its long-range energy conservation and performance improvement program. Based upon initial results it is well on its way to achieving its goals.

This article was supplied by the Landis Division of Siemens Building Technologies, Ltd. with Canadian headquarters in Mississauga, Ontario.